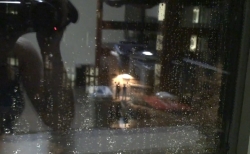 Ah yes, the college dorm life—such wonders it held for many of us. As we hauled our asses out of our beds—hung over or over somebody—to get to our academic destinations, each step we take brings us memories of the night before. From the booze filled conversations, the awkward recitals and to the pleasurable score of the evening, the dorm life would always revolve around the three necessities of college education: drinks, company and sex.

But what if all of a sudden, you witness one of your dorm neighbors being dragged away in a body bag by two mysterious men who seem to have no affiliation with the school or any fraternity. The party stops all of a sudden…

Creators Adam and Nolan Lebovitz introduces their new web series FreshmanJulie, a suspense-thriller that premiered this month about a college newcomer Julie (played by Lindsay Rathert), who documents her daily life with a webcam as she explores the wonder and surprises of first year in the university. Her chronicles took an unexpected turn when she finds out that her dorm neighbor and love interest, Craig (Kevin Reich), went missing.

“Adam and I have always had an interest in new media, as it presents itself as the new frontier,” said Nolan in a recent Chicago Tribune piece, who also wrote and directed the 2008 thriller, Tortured, starring Laurence Fishburne and Cole Hauser. Freshman Julie was inspired by the brothers’ own college experiences. 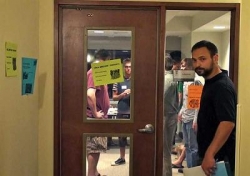 “Going to college, you think that everyone has the same background as you. But when I went to college, I heard a story about a kid we went to school with and one day his room was raided by the FBI,” Adam said. “It made me think: Who was this guy, really?”

Don’t look so puzzled when you first witness Julie’s vid logs in the series—you’re not the only one thinking, doesn’t this feel a little too lonelygirl15?. Julie is the innocent “girl-next-dorm” type with the charm and smile to match that fire red bra she seems to be so proud of. Her character should be immediately recognizable and understood, but even if you do criticize Julie as a little too average, it’s really hard to dislike her, even if you tried. C’mon, just look at that smile…it’s like your favorite Rom-Com playing before your eyes.

Adding the suspense and thriller element to Freshman Julie is a welcome addition, and it’s a good attempt in eschewing from the traditional college-life storyline. Judging from where first episode left off, Freshman Julie may bring in a new life into the party but we’ll find out if we’ll stick around or not.