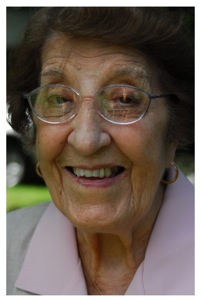 Clara Cannucciari is 93 years old and knows her way around the kitchen—and how to make cost-effective meals. Her skills, which she learned from her mother during the Great Depression, are coming in handy given cutbacks, layoffs and the nation’s overall recession.

“Clara would go on and on about how ‘this’ was going to be her last year,” her grandson, Christopher Cannucciari, said. “She started saying this around her 80th birthday. We all knew that she would probably live past 100. After she turned 90, I decided I better document her stories and recipes just in case. I filmed the first episode after she turned 91.”

The younger Cannucciari, Christopher, a director-producer-cinematographer who has worked on a viral series for the Onion News Network and produced MTV’s Made, created Great Depression Cooking, a web series that has become so popular that a DVD is now in the works. 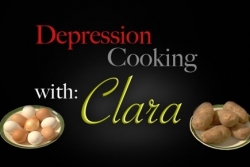 Christopher Cannucciari launched the first three episodes online in summer 2007, without a distributor. “As a filmmaker, I am excited to distribute independently,” he said. “Technology has finally reached a place that makes distribution costs so minimal that the artist can self-distribute and retain the rights of their works.”

“She is currently on an extended hiatus, but there is always the possibility for a few more later down the road,” he said. Episodes can be found on the web site and on YouTube and typically run six to seven minutes, but can go as long as 10 to 12 minutes for more involved recipes.

Christopher Cannucciari said Episode 3, “The Poorman’s Meal,” remains a popular episode because it’s the “quintessential meal for cost-cutting while bulking up your stomach.”

As Clara’s popularity grows, the site recently added advertising to offset the cost of using a dedicated server. “I’m a one-man show so most of the cost is my time, hard drives and a few potatoes here and there,” he said. “The plane tickets to visit Clara’s would be bought weather I was filming or not.”