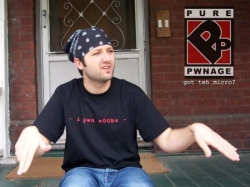 If you know how to pronounce the show’s name, chances are you’re already a fan, or you will be soon. If you don’t, it – as well as the rest of the show – is probably going to go right over your head.

Pure Pwnage focuses on the life and times of Canadian professional video gamer Jeremy, better known as his online alias “teh_pwnerer” (played by Jarett Cale) and his roommate/brother Kyle (Geoff Lapaire, also the director). In the early episodes, the show starts out as a mockumentary for Kyle’s film class; as Jeremy has been playing video games (and doing little else) since he was two years old, Kyle gets plenty of revealing looks into his life simply by following him around. Imagine a person whose socialization process has gone on in-between games of Counter-Strike or Command and Conquer, and then a fairly normal, if somewhat geeky, film student, and you’ve got Jeremy and Kyle right there.

As the show progresses and a few supporting characters are added – FPS Doug (Joel Gardiner), a specialist in first-person shooter games, Dave (Dave Lee), a latent fighting game specialist and cook, and Anastasia (Miranda Plant), an online role-playing gamer as well as Jeremy’s love interest – the show gradually shifts from mockumentary to drama. While the premise of the show is still centered around Kyle following Jeremy around with a video camera, elements of video game mastery (for example, “über micro”, or the ability to efficiently command a large number of individual combat units in a strategy game, lets Jeremy sling fireballs around outside the game) manifest themselves as superpowers, and Jeremy, Kyle, and the rest of the gang find themselves in conflict with a mysterious organization with equally mysterious motives.

I consider Pure Pwnage to be a shining example of web television at its best. This is not my way of saying “Pure Pwnage is good enough to be shown on network TV”; it doesn’t have the mass appeal of a Heroes or a Prison Break. Rather, as a gamer, Pure Pwnage offered me exactly what I want from web TV that network TV simply can’t deliver. It isn’t about finding a story that everyone can relate to, it’s about telling a story to a specific audience. If you have played enough video games, practically every line in the show is loaded with a reference to something or another that makes you feel just a little bit validated for choosing to spend your youth playing Mega Man instead of watching The Fresh Prince of Bel-Air. At its heart, Pure Pwnage is a show borne from a need that mainstream pop culture simply did not fill – the need for gamers to feel like they have a culture outside of the games they play.

And boy, did they fill that need. The response to Pure Pwnage over the last few years (the show started in 2004) has been so immense that an entire world has popped up around the show; it has given rise to its own community (the “Pure Pwnage Gamer Army“), live screenings at several locations in Canada. What’s more, the PP crew has proved themselves admirably versatile; the show is technically gritty, but intentionally so. The handycam, low-budget look is simply one of a dozen film techniques that will pop up over the course of an episode. The actors don’t just act, either; they sing, do voiceovers for machinima scenes (film shot within a video game engine – see Red vs. Blue), and more recently, they cook, as evidenced by Dave’s spinoff segment, Pro At Cooking.

In this light, the things that Pure Pwnage doesn’t do so well are somewhat forgivable. It takes a while for the show to get started; episodes 1-3 are funny, but not particularly memorable. Episode 4 (above) is where Pure Pwnage’s “main story” begins; it becomes more drama and less documentary, and the actors really start to exaggerate their character quirks into full-blown wackiness. However, I use “main story” in quotes because the overarching plot lacks the timing or pace of most TV shows. It doesn’t have the live-in-the-episode spontaneity of a sitcom, or the perpetual-cliffhanger of a show like 24. Pure Pwnage is a “character-driven” show, at least insofar as the story merely pops up every now and then as something for the characters to do, and if you don’t like the characters, you’re probably not going to keep watching. Skeptical viewers ought to start at episode 4 – if the numerous layers of geek culture homage resonate with you, give the rest of Pure Pwnage a shot.

[Editor’s Note: One of the stars of the series, Troy Dixon (who played Terence “T-bag” Brown), passed away last month in an automobile accident. We at Tubefilter extend our sincere condolences to Troy’s family and those who knew him. He will be missed. For more, see the blog post on the Pure Pwnage site.]