It’s not the first time the web has beaten Hollywood studios to a cultural meme and undoubtedly won’t be the last. (See Tubefilter’s story on All’s Faire.) From Ironsink, (the ones who brought us those sexy softballers in Model Ball) comes Cougars, a sultry new web series glorifying the lure of the older woman. The idea of a script focused on a pack of MILF’s on the prowl has long been floating around Hollywood until it landed at Gold Circle Films who has it slated for a 2009 theatrical release. It’s being penned by Kristine Skeie (The Mind of the Married Man) and Paul Brooks (producer on My Big Fat Greek Wedding).

While I always like to see web television beat Hollywood to the punch, Cougars currently leaves something to be desired. In this case, such a high concept project could have benefited from the touch of a studio that truly understands formula.

As it stands, Cougars is clunky—a bizarre cocktail mix of The Rules (for Cougars), and a dirtier Sex and the City with more sex, and less story. That being said, I have to admire the 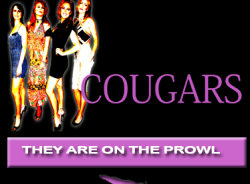 show for some of the risks they’ve taken that one could really only get away with on the internet.

The show opener punches up some colors while turning the background to black and white like a artsy 1980s music video. It’s definitely attention grabbing. The show also pushes the envelope to the point that no ratings-conscious studio would likely allow. Case in point: when the ladies of Cougars face off against a Panther (an over-the-hill version of a Cougar) one of our heroines who happens to be a gynecologist utters: “Her c–ter has transmitted so many sexually transmitted diseases it’s classified as a weapon of mass destruction.” Yikes! Now there’s a Samantha-worthy insult if I ever heard one.

Raunchy, and sexy the show is. Story heavy it is not. While I’d recommend the show add a little more meat for these cougars to chew on, it’s worth a peak to see how web shows continue to push the enveleope and beat the studios to the punch.