As viewers junkies of web television we all know that the web is the breeding ground for zany ideas sometimes unsuitable for mass consumption. Yet the very idea of freeing ourselves from creating content for mass consumption allows creators to go hog-wild, bathing themselves in the limitless possibilities of their own creativity. While some of these limitless ideas turn out as bad web experiments, others while inexplicably bizarre, stick with you. Odd Noggin is exactly that– inexplicably bizarre, yet somehow kind of irresistible. 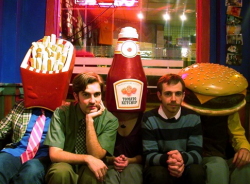 The show was born when New Hampshire artists John Herman and Ryan Plaisted met for the first time over coffee. They birthed the idea of a surreal show about a group of friends who all happen to have food items for heads. Days later they were shooting. “We met for coffee to discuss creative projects,” explains Herman. “Within minutes we were plotting the show episodes. Two days later we were shooting with a cast of actors. We ran with the idea.” Plaisted added, “When you can say to somebody you’ve just met, ‘let’s make a musical web series about people with giant food items instead of human heads, and that idea is received, considered, and even embraced, that’s probably an indicator that you’re compatible. Maybe that makes John and me the Odd Noggins.”

There’s something quintessentially American and wholesome about the show. A lot of that stems from the musical soundtrack supplied by Phil Kliger. It’s up-beat, catchy, and if you watch the show more than once you pretty much can’t help but singing along.

Additionally, you can’t deny the fact that a hamburger, fries, and ketchup compliment each other to the point that they really almost can’t exist with out one another. Making these three food items hetero-life-mates with routine conflicts anyone in a close relationship might fight about is really quite brilliant. 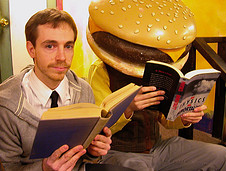 The series is delightfully slick, weaving in a well-polished, comic-book surreality. Show creator Herman is no stranger to new media, having success with Gravityland earlier this year which is an equally surreal delight following a group of characters in a small New Hampshire town.

Visiting Herman’s blog one is almost overwhelmed by the daunting tasks he has accomplished, and is about to thrust into the world: two novels, a comic book to accompany Gravityland, and completion of hosting duties on web show Energy Smackdown, and not to mention, two more web series on the way. If either of the series are as unique as Odd Noggin we’ll be watching. With only episode one out so far, new episodes are set to release every other week starting December 15th at oddnoggin.com.