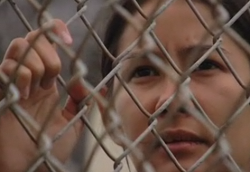 I always have to commend a web series that tackles high concept drama with a nonexistent budget. High-concept isn’t easy, it’s one of those things where you really feel every penny you don’t have. This is where Dirty Bomb Diaries really shines. Made on a claimed $600 budget for a sixteen episode season, this high concept series certainly does the best it can with practically nothing.

Dirty Bomb Diaries is the fictional story of a young woman, played by Misty Van Cleve (The Young and the Restless), trapped in a city where a radioactive dirty bomb has exploded nearby. The woman, a typical girl next door type, is forced to survive on her own as she has a limited amount of supplies. The series was created and written by LA-based Sean Hinchey, directed and edited by Eric Tozzi, and features a strong score by Kurt Oldman.

Watching the series play out, it’s clear this is a solid filmmaking team. The camera work is strong and engaging and the story is well told.

Episode 1 starts right as you’d expect it. We meet our lead, we are told of her normal life problems (ex-boyfriend, independence, etc.) before ending with that frightening rumble. Episode 2 is where we really start the story and start tackling how the lead is going to cope with such an extreme situation. As the episodes progress we come across many of the expected issues such as finding food and water, dealing with radiation sickness, and trekking down the path of dehumanization.

Most of the series is told webcam style, with the lead female vlogging to her computer, and is juxtaposed with slick narrative shots showing us events that our lead is going through. Naturally with most of the narrative coming via vlogging, it’s natural if not too easy to make the LG15 comparison. One can guess that this was what the basis of their premise was (“It’s Lonelygirl15 but 50 miles away, and an A-bomb just blew up”).

During the first few episodes, I have to say that I wasn’t a fan of all the vlogging. It felt almost too much, and without any person interacting back to the lead it made her character seem overly passive. Naturally if a passive person is put into a situation like this, she would likely remain passive. But if you add another person pushing her to be proactive you would immediately have conflict as well as a faster moving story.

By the latter episodes the story definitely starts to really move. We also see less vlogging and more dramatic scenes with our lead scrounging for supplies and running around. In the latter episodes I was happy to see some strong escalation for our character (chase scenes, breaking and entering, and more). What I was not happy to see in these latter episodes was a lack of a clear goal for the woman. This also led to a lot of unanswered questions as a viewer (usually centering on the question “why”).

In all, Dirty Bomb Diaries is a solid dramatic web series. There’s a saying around town the bad ideas get the funding, and the good ideas get squat. The saying definitely holds true here. Sean Hichey and Eric Tozzi did everything they could with $600 and more, netting what they say is over 2 Million views in aggregate for the series. They tell an engaging story with a high concept premise and though I may not be looking forward to say a 2nd season, I am looking forward to seeing the next project by this CAA-repped team of talented web series creators, which from what I hear could be a feature film based on the series.