'Take Me Back' Is An Existential Ride Through Time

Take Me Back is a joyous departure from regular web series fare. The plot of the story is more existential, and interpretative than it is heavy on the exposition, leaving many details to the imagination. The Montreal native creators, Joe Baron, and Seth Mendelson are incredibly skilled filmmakers in their own right while showing shades of Charlie Kaufman, or Wes Anderson. 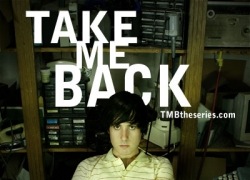 It’s hard not to watch all ten episodes of Take Me Back in one sitting, as the creators give you a cliffhanger in every episode, but also provide a complete cinematic experience if viewing the series all at once. The story begins when Al (played by Mendelson) finds his life turned upside down when kidnapped by a masked vigilante. As the story progresses, the identity of this masked man is revealed, as Al’s life outside his tiny prison begins to fall apart. The crux of the plot is held together by a loose time travel device, but the message of the story does not lie in the details that justify some of Baron and Mendelson’s slick camera tricks, but instead lie in the details of human interaction, and what makes a relationship tick.

Since completing the series this summer, Baron and Mendelson have been long-preparing a DVD for fans. The DVD has been so long in the making, the guys just recently posted a message to update fans, and provide a look behind the scenes of the series. (Their long-winded, but sincere apology ends just before the five minute mark, where the behind the scenes footage begins.)

The guys have been hard at work on new web content. While they’ve said a sequel or a second series of Take Me Back is not in the cards, they have promised what they are working on is, “pretty damn exciting.” If it’s half as good as Take Me Back, we’ll forgive you forgive your for your slacking on the DVD extras.