Frequent collaborators, director Dale Fabrigar (a semi-finalist on Steven Spielberg’s short lived On the Lot reality series) and writer Kurt Patino, have teamed up with actress Kelly Stables (best known for playing Evil Samara in The Ring movies) and visual effects wizard Michael Morrealle to produce a new horror/fantasy web series titled Soul Fire Rising. The show, produced by King Dream Entertainment, follows demon Lilith, played by Aimee Lynn Chadwick (Las Vegas, Trade) – who could be compared to a very hot goth Maggie Gyllenhaal – as she wanders through Los Angeles stealing men’s souls while searching for Eve (to be played by Stables in future episodes), a now mortal demon worth one million human souls. The first two chapters, running about three minutes each, are currently available on the show’s website and MySpace. The website also features cast interviews and photos. 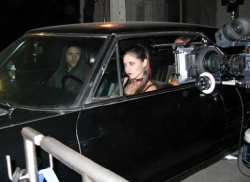 In the first episode, ‘I Give You My Soul,’ Lilith emotionally crushes a young musician (Ryan Freeman of Undressed) when she dumps him. If the musician (who is wearing more eye makeup than Lilith) can prove his love to her, she promises to be with him forever. All he has to do is give her his soul…

While the premiere episode doesn’t do much in setting up the story, we do get to see the beautiful Lilith in action. Making use of the series’ mature audience warning, ‘I Give You My Soul’ features plenty of the red stuff, as well as some nifty visual effects, courtesy of producer Morrealle, who worked on big budget spectacles like 300 and The Matrix Reloaded with his effects house Amalgamated Pixels.

The second episode, ‘The Messenger,’ picks up as Lilith drives away from her last victim. Immediately after complaining that she’s bored, Lilith finds relief in a hooded hitchhiker named Gabriel (Zodiac’s Mitchell Fink). Little does she know, Gabriel is a messenger with a special delivery just for Lilith. Not nearly as strong as the first episode, ‘The Messenger’ still has some decent effects work and begins to delve into Soul Fire Rising’s mythology. The dialogue is especially goofy here, not to mention the HELL caller ID on Lilith’s cell phone. Shouldn’t it read Satan or Beelzebub?

Although the acting and dialogue are a bit cheesy, Soul Fire Rising has an interesting story, a hot lead and enough cool effects to keep me watching.