Getting a big break in the Hollywood is a dream come true for most aspiring young actors, directors and producers. Interns Anonymous profiles six such hopefuls in this cheerfully funky appropriation of the perennial coming-of-age story. 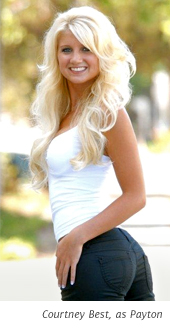 The pilot gets off on the right foot with a strong if somewhat goofy opening (in one scene an intern randomly has a cup of water thrown in her face by a passing motorist) – but it does little other than introduce the characters, and doesn’t 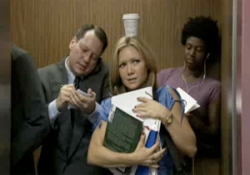 hint at a larger story arc or plot line. The interns, Ronda, Mesha, Payton, Alex, Donnie, and Lee, appear one dimensional on screen – but the ensemble nature of the cast means that ultimately, this probably won’t matter. Played by a cadre of young talent led by Amy Lawhorn (Ronda), the multi-ethnic ensemble is obviously very green — but that doesn’t so much take away from the show as add to it’s charm.

The series is slated for 10 episodes in its first season, and is currently self-distributed on a variety of platforms including AOL Video, Funny of Die, Vimeo, and YouTube — although with luck, that won’t be the case for much longer. Sources close to the deal tell us that Creative Holiday Productions is in talks with ICN, and that release of further episodes will be delayed until a deal is finalized — most likely early in 2009.

Series creator and writer ShaRonda ‘Roni’ Brown shared with us the source of her inspiration: “It came from my many entertainment internships – I went through more than five! That, and listening to the stories of other Hollywood hopefuls around me.” Shot in August and September in and around Los Angeles and the San Fernando Valley, the pilot epispode could just as easily have been filmed in Sacramento — the team didn’t make good use of the the iconic tinseltown locations right here in their own back yard.

The show’s website isn’t anything to write home about, and it looks like the plan to promote the site as a social network for real Hollywood interns might be a bit of a long shot — but the core concept behind the series is appealing. The cast, although light on credits, is big on personality. Payton, played by San Diego import and USC student Courtney Best, is a charmingly ditzy Southern Belle, while authentic Southerner Jake Miller plays a Ryan Fillipe-esque womanizing playboy named Alex. Here’s to hoping that these interns make it big in Hollywood – and that they speed up the credit roll at the end of the show.