This is part 2 of a multi-part review of the initial lineup of Strike.TV’s original web series. 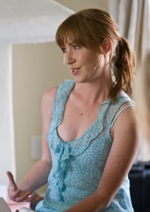 foray into impoverished home ownership. Written by Kaling and Lester Lewis, the mockumentary pilot begins with Mindy throwing a baby shower for herself in order to furnish her home. Hilarity ensues when Mindy gets annoyed at her guests for actually buying gifts for a baby girl and not checking her registries…at Crate and Barrel and Z Gallery.

I don’t watch The Office so I’m not predisposed to LOVE Mindy Kaling, but for some reason, the moment she appears onscreen at the opening of the show, I laughed. A combination of her sudden close-up, a glint of sardonic wit in her eyes and the fast throwaway joke about fellow writer and the previous owner of her home Mike Schur, elicited a quick but very real guffaw. And this is just the beginning.

Strike.TV must have a production value mandate, because this show looks great. The music cues are right on, the casting stellar, and Jessica Landaw’s direction is spot on. At three minutes, it’s the perfect length and totally watchable. I’ll definitely be coming back for this one. 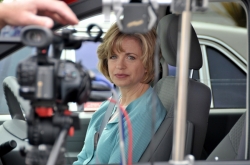 Hmm. So I’m trying to understand how this is ‘Episode One’. At twelve minutes or so, it feels like they’ve told every joke possible with this particular concept: the omniscient ‘state-of-the-art on-board navigation/concierge/emergency help system with analog curb-feelers’ that comes standard with main character, Ted’s, new minivan.

From helping Ted unlock his car to directing him to the nearest whorehouse, writers Ron Corcillo and Russ Carney of America (yes, that’s how he’s credited), seem to run the gamut of humor in this faux commercial spoofing the OnStar navigation system. It’s way too long, but definitely funny in spots and the actors, Bob Clendenin as minivan owner Ted and Michele Scarabelli as his wife Judy do a good job. But, I just have to ask, what’s next?

As is the modus operandi of Strike.TV, production value is high and Clendenin and Scarabelli are talented and vaguely familiar. Daryl, the OnCar voice played by Russ Carney of America is funny and spot-on in his dry, matter of factness. And the morality tale ending with Ted’s gratitude to Daryl for ‘boning’ his wife (you have to see it) and ‘teaching [him] how to love’ is pretty funny. So, I guess, watch it, but watch it in three minute stints so it feels like a good web series and not just a long overdone one-off.

[Ed. Note: We know you guys don’t always agree with our reviewers’ opinions, so please post a comment to let us know what you think of the series! Read Part 1 and Part 3.]