'Model Ball' Shows Us These Ladies Can Play

Iron Sink Media, creators of Soup of the Day and Roommates are back with new web original Model Ball. Debuting yesterday, episode one of Model Ball on its YouTube channel is nearing 50,000 views–not bad for debuting less than 24 hours ago.

On the surface, it seems a little trite – getting a bunch of hot girls to play to softball.  But this isn’t a show selling out by simply dumping some Gatorade on the girls in white baseball tees, and having them run around the field. This is a story with conflict, rivalries and perhaps a little passion.

The show stars Tarah DeSpain (WeHo Girls, Roommates) as model Holly McBride, who looks less like a runway model, and more like the hot girl next door, as her screw-off cousin Jake McBride (Tim Pilleri) makes a bet that he can win the beer league softball championships with a team full of models. Episode one sets up the bet, just giving the audience a little bit of a teaser. Not a bad start, but throw in a love story with entertaining rival softball jerk wad, Gary (Levin O’Connor), and I’ll be coming back for more. 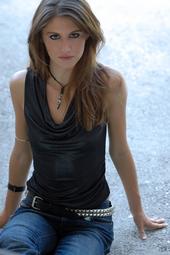 Iron Sink has some more than ample experience in interactive web series with Roommates, the 2007 web original drama made for MySpaceTV, and Soup of The Day, which allowed for the first time tens of thousands of MySpace members and online users were able to interact and influence the Soup of the Day characters. So far there hasn’t been much in terms of interactivity from the Model Ball team, aside from the start of a fairly dull video blog from lead character Holly.

There’s also plans to cross-pollinate the stars of various Iron Sink shows to help spread the fans around a bit. Given DeSpain’s YouTube fame as one of the WeHo Girls, and Pilleri’s role as producer of the cross-town hits NoHo Girls and VanNuys Guys, they are no strangers to racking up millions of views. In fact, posting the first ep of Model Ball on those A-list YouTube partner pages is probably what led it to the top tier of the most-viewed today.

New episodes of twenty-episode series will play on ironsink.com every Monday, Wednesday, and Friday, as well as YouTube and their MySpace page.