YouTube Shorts ads are coming in 2023. Here’s what creators need to know. 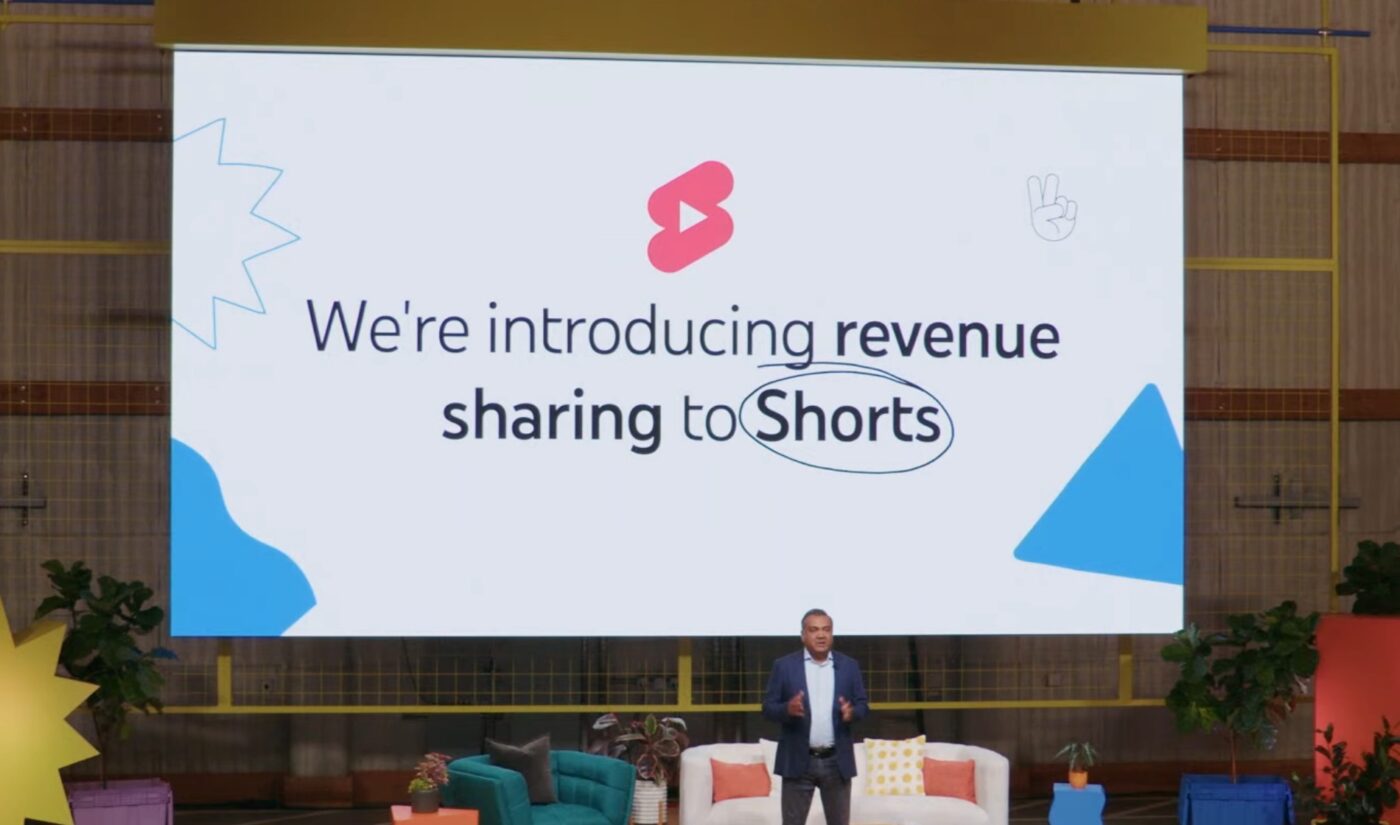 As part of a live-streaming event called Made On YouTube, the biggest online video platform in the world made multiple announcements. In 2023, ads will begin running in between videos on YouTube Shorts. To compensate creators for the ad revenue they generate, YouTube will adjust its Partner Program to make monetization easier to enable on short-form channels.

The new ad format will bring Shorts monetization in line with YouTube’s other revenue streams.

This year, the theme of YouTube’s creator relations has been “multiformat.” The platform has repeatedly encouraged its community to post a mix of long-form videos, short-form clips, and live streams. Adding reliable monetization to Shorts will give creators a reason to adopt that approach.

“From a business perspective, the key benefit of Shorts for me is that they help me pull people into my community, whereas for long-form, it brings in a lot more revenue,” short-form star Kristina ‘Kallmekris’ Collins said during the Made On YouTube event. “That’s why this news about the partner program coming to Shorts is so great. My work will be supported in much the same way, no matter the format. That need for a strategic trade-off – weighing up the pros and cons – will disappear.”

The nature of the Shorts ads, however, suggests that creators will still need to be strategic if they wish to fully benefit YouTube’s new revenue stream. Since the ads will run in between Shorts, not before them, they will not be attributed to individual creators. Instead, YouTube will pool up all the Shorts ad revenue and dole it out proportionally. Shorts creators in the Partner Program will receive a share; the size of the shares will be based on the Shorts viewership generated by individual channels.

Therefore, creators who base their long-form strategy around watch time and engagement may need to shift their priorities if they plan to run Shorts ads. Whatever draws the most hits will, in theory, rake in the most revenue.

YouTube Chief Product Officer Neal Mohan (who has had quite a busy week) used monumental language to introduce the Partner Program shift that will accompany the new ad format. Previously, creators needed 1,000 subscribers and 4,000 hours of YouTube watch time in a single year in order to qualify for YouTube’s long-running monetization service.

As of today, the 1,000-subscriber stipulation is still in effect, but YouTube wants to make sure creators can run ads even if their videos are only a few seconds long. Since short-form content barely moves the needle when it comes to watch time, YouTube will waive that requirement for creators who get at least 10 million Shorts views over a 90-day period.

“YouTube’s first-of-its-kind, industry-leading Partner Program changed the game for long-form video. And now we’re changing the game again, this time by opening it up to Short-form creators and introducing revenue sharing to Shorts,” Mohan said during the event. “This is the first time revenue sharing is being offered for short-form video on any platform at scale, adding to the 10 ways creators can already earn revenue on YouTube.”

Say goodbye to the Shorts monetization of the past

Since the new-and-improved Partner Program will make it easy for Shorts creators to reap the ad revenue that is coming their way, YouTube will phase out forms of monetization that it deems “temporary,” according to YouTube VP of Americas Tara Walpert Levy. Specifically, Walpert Levy was referring to the Shorts Fund, a $100 million payout purse introduced last year.

For the creators who tested out YouTube Shorts during its earliest days, the platform’s eponymous fund was a valuable lifeline. As short-form content grew on YouTube, however, Hank Green criticized the “fund” model of monetization. Green argued that the Shorts Fund would be diluted as more creators looked to get a piece of it.

A new deal for creators

Shorts ads aren’t just new, but different — they will employ a revenue-sharing model that strays from YouTube’s usual payouts. Partner Program members have traditionally kept 55% of the ad revenue they generate, with the other 45% going to the platform. On YouTube Shorts, that split will be reversed. It will be YouTube, not its partners, that takes the 55% cut.

Before you accuse YouTube of short-changing short-form creators, consider what it can unlock with its additional 10%. A press release from the platform said that YouTube is taking a higher share of Shorts revenue in order to “help cover costs of music licensing.” The licensed tracks will be available via a service called Creator Music, which was also announced during the Made On YouTube event.

Some Shorts creators may not take advantage of that audio library, and they may feel like they deserve the same 55% split allotted to long-form videomakers. Music, however, is a cornerstone of TikTok. If YouTube wants a piece of that culture while still running ads, it will have to pay up.