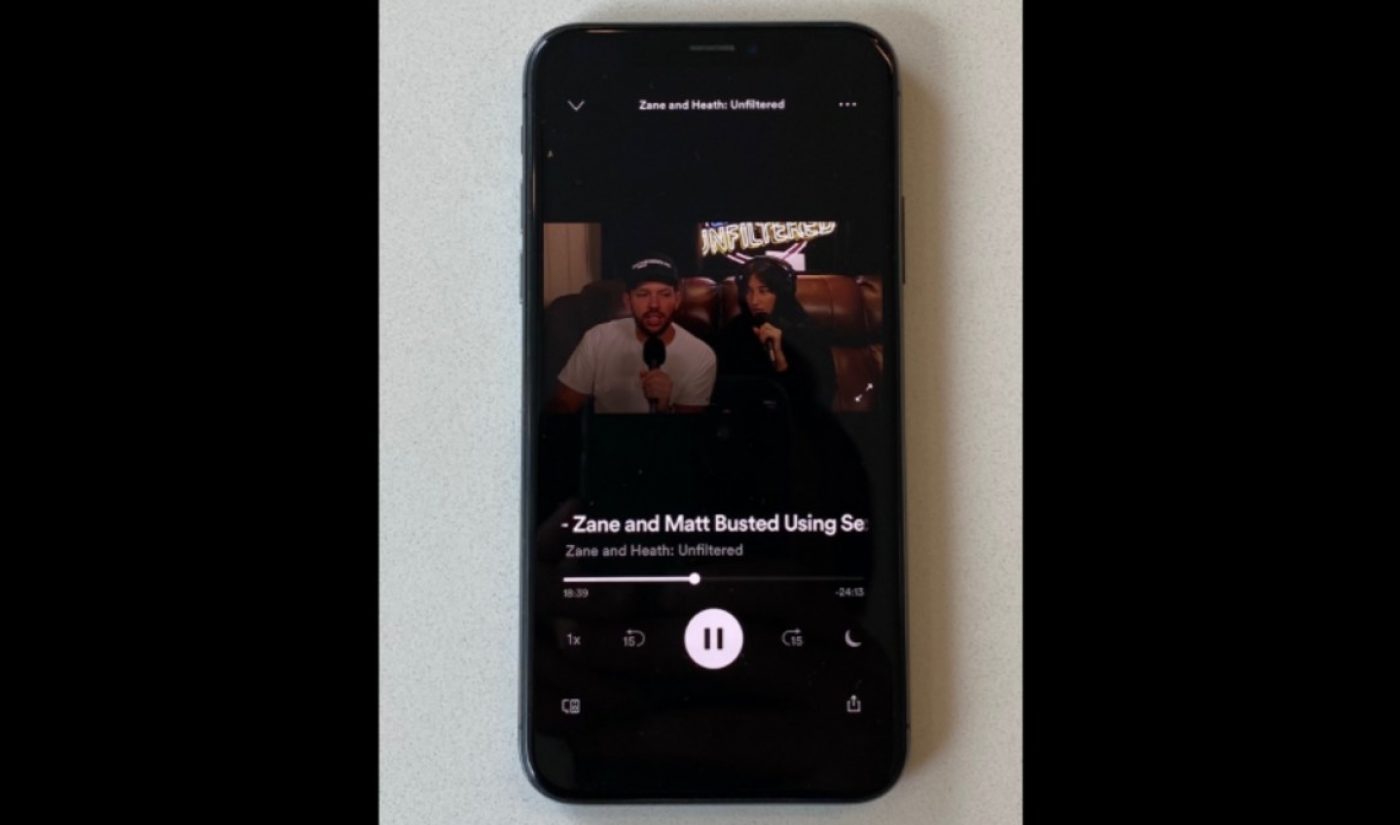 Amid an ambitious push into the podcasting space following the $340 million acquisition of Gimlet Media and Anchor — as well the subsequent purchases of Parcast ($56 million) and The Ringer ($200 million) — Spotify is looking to bring a visual component to its audio endeavors.

Beginning today, Spotify is launching a global test for 50% of users that will mark the music streamer’s foray into native video podcasting, according to a person familiar with the program. The test will involve the four most recent episodes of a podcast hosted by none other than YouTube stars Zane Hijazi and Heath Hussar dubbed Unfiltered, which will now be available as videos within the Spotify app. While a full rollout for video podcasts is imminent, a date has yet to be confirmed.

When the aforementioned episodes are launched — on iOS, Andrioid, and the Spotify desktop app — a small tile will appear at the bottom of the screen, which users can then tap to enlarge to watch videos in full. When users consume video podcasts on Spotify, there will be no difference in audio quality, and videos can continue to play audio even when mobile screens are locked. When ad reads occur during video podcasts, a static image of the product or company will appear, sources tell Tubefilter, though no bespoke video ad options are available as of now.

“At Spotify, we routinely conduct a number of tests in an effort to improve our user experience,” a Spotify spokesperson tells Tubefilter in a statement. “Some of those tests end up paving the way for our broader user experience and others serve only as an important learning. We don’t have any further news to share at this time.”

Given that it now owns some of the most formidable podcast studios in the space, Spotify clearly wants a piece of the booming video podcast market, whereby countless hosts simultaneously film their podcast recording sessions and upload them to YouTube as a means of maximizing exposure.

To this end, Spotify’s The Ringer also operates a robust YouTube presence, distributing shows like The Rewatchables to its 264,000 subscribers and racking up roughly 5 million monthly views. The test signals that Spotify may be looking to reclaim some of this video viewership and bring it in-house. And while the test marks its foray into video podcasting, Spotify has had its sights set on integrating original video programming into its platform for many years.

The test doesn’t appear to be making the Unfiltered videos exclusive to Spotify, given that the four most recent episodes of Unfiltered are still available on YouTube. And sources familiar with the test note that Spotify isn’t funding video production for Unfiltered, which has long produced a visual iteration of every episode. That said, Spotify is building out a studio in Los Angeles that will serve as the epicenter of its podcast business, and which could comprise video production facilities.