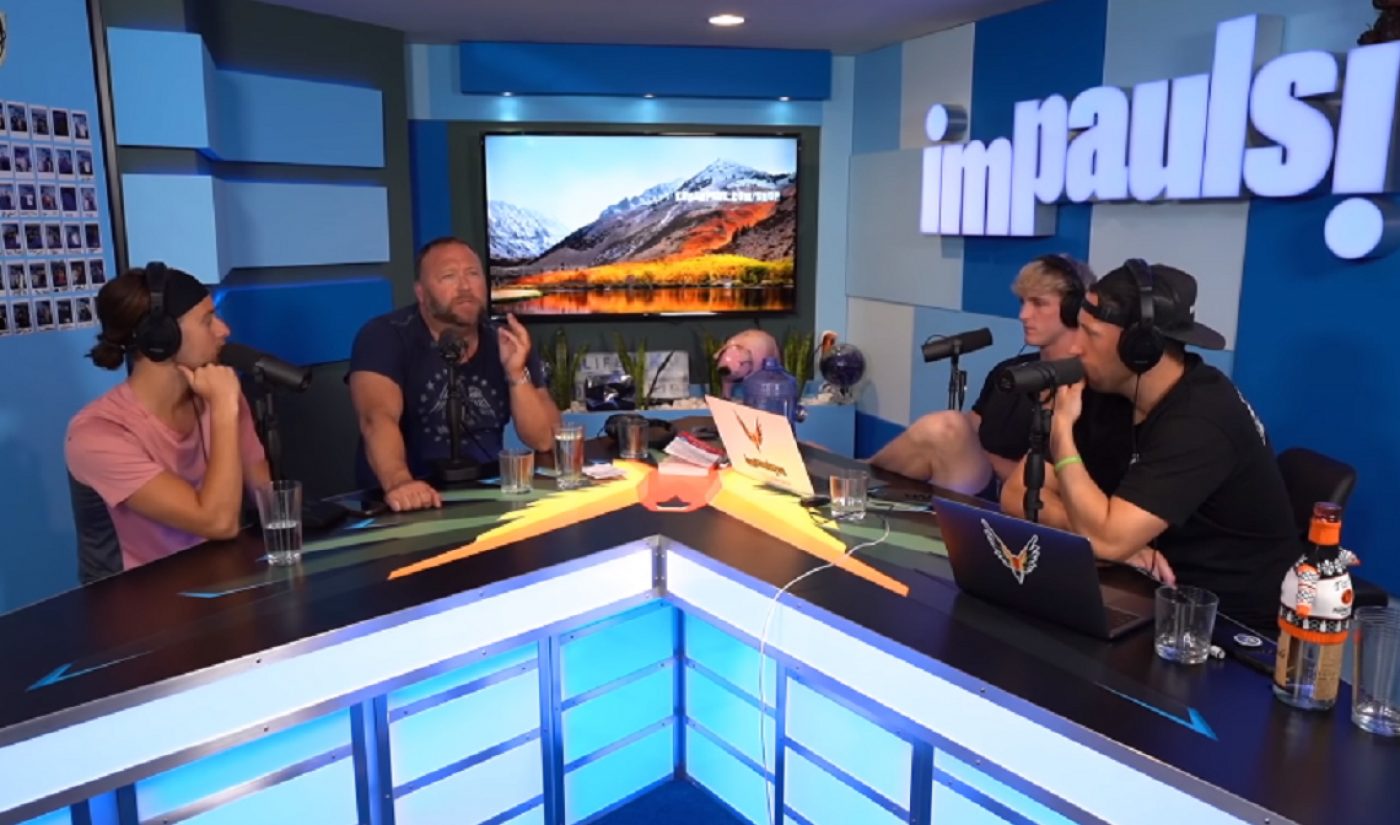 Alex Jones, the notorious far-right conspiracy theorist who’s been banned from virtually every major platform, made a two-hour return to YouTube this week courtesy of Logan Paul.

Paul, who has 19 million subscribers and nets more than 50 million views per month, featured Jones in the latest episode of his Impaulsive podcast, which counts an additional 1.4 million subscribers and 10 to 15 million views per month on its own dedicated YouTube channel. Now, Paul is facing backlash for giving Jones space on YouTube and a sizable audience to whom Jones can continue shouting about false flag attacks, secret government plans, and Pizzagate — a conspiracy theory alleging Democrats are running a child sex ring out of the basement of a pizza shop in Washington, D.C.

It’s worth noting off the bat that Jones’ appearance on Impaulsive is in line with Paul’s recent apparent turn to content about conspiracy theories. Paul doesn’t seem to believe in them himself, but conspiracies are a major clickbait topic on YouTube, and Paul looks to be cashing in. Last month, he released To the Edge and Back, a mockumentary about the flat earth theory. It’s amassed over 4.7 million views in the three weeks since its upload.

Having Jones on his show is an even deeper dive into even more controversial conspiracies. “I got controversy–literally the definition of controversy,” Paul says while introducing Jones to the show amid a round of cheers and applause from his co-hosts, Mike Majlak and Spencer Taylor. “He is the most banned person in the 21st century […] and actually has been endorsed by Donald Trump.” Once Jones is seated, Paul adds that Jones has been “deplatformed, silenced, and ridiculed,” and asks Jones what it’s like to be him.

“It’s awesome,” Jones replies. He goes on to claim that being banned has been good for him and his company, InfoWars, since more supporters are now coming to his website to tune into his daily four-hour talk show (and, presumably, to peruse InfoWars’ legion of healthcare products and conspiracy-themed merch). But, like many things with Jones, that claim of an influx of traffic is questionable at best.

Early in Jones’ episode, Paul, Majlak, and Taylor do offer up a few rebuttals to Jones’ theories. They specifically challenge his belief that the shooting at Sandy Hook Elementary School in Newtown, Conn., was arranged by the government using crisis actors, and no one actually died. Majlak, who grew up in a city half an hour away from Sandy Hook, is particularly critical, asking Jones to explain the supposed anomalies that made him think the shooting was staged. Jones — per usual — deflects, moving on to allege his interviews with mainstream media about Sandy Hook were purposefully edited to make him look bad. He ultimately doesn’t answer Majlak’s question. (Jones notably was not able to deflect in court, where he had to recently appear because he’s currently being sued by the families of Sandy Hook victims. He admitted in sworn testimony that he does believe the shooting was real, and a “form of psychosis” caused him to believe it wasn’t.)

But as the episode goes on, the three shift away from challenging Jones to largely just letting him rant unfettered. At one point, Majlak says, “You make some really solid points.” He then references Pizzagate, and asks Jones, apparently serious, “If we order [pizza] From New York City, what are we funding?”

The episode has sparked a wave of backlash on social media, with some pointing out that Paul’s audience — which skews young — might not get how serious some of Jones’ actions are. Others are leery of the potential damage that could result from Paul acting as an amplifier for Jones and his opinions.

Alex Jones considers himself the underdog. And Logan Paul is sitting there asking how it feels to be seen as the villain.

Here are some of the comments: pic.twitter.com/e3SX02hoqu

What kind of person thinks a hilarious podcast guest would be a guy who terrorized the parents of babies killed in a mass school shooting?

Looks like Alex Jones has teamed with Logan Paul to reach that 10 year old demographic.

Logan Paul exposing his audience of children to Alex Jones nearly uncritically for two hours should place him on a watchlist. https://t.co/9bDcosFDCE

Worrying news that Logan Paul has far right conspiracy theorist Alex Jones on his podcast. Has the potential to introduce him to a new and young audience. What is it with these big YouTubers?!

Logan Paul is all over the place on the new Alex Jones podcast, definitely out of his depth on this one

As some other folks are pointing out, this actually isn’t Jones’ first time back to YouTube since his mass banning last year. In February, he was a guest on Joe Rogan’s eponymous podcast. (For those curious, his appearance on that show was as chock-full of yelling about conspiracies as his appearance on Paul’s, only for nearly five hours instead of two.)

Here is Logan Paul’s podcast co-host explaining, “because Joe Rogan had Alex Jones on his show it’s okay we do too.” I wonder why Rogan is accused of being a gateway to the far-right 🤔 pic.twitter.com/co8XkPCnDe

Meanwhile, InfoWars’ writeup of the episode called it a “mega-star crossover.” Right-wing media and vloggers notably also lauded Paul in February, when he brought pro-gun advocate Kaitlin Bennett on for Impaulsive‘s 41st episode. Bennett became infamous after posting college graduation photos showing her walking around Kent State (which, of course, has a dark history with gun violence) strapped with her AR-10 rifle. Following her appearance on Impaulsive, conservatives praised Bennett and celebrated Paul for being “red-pilled.”