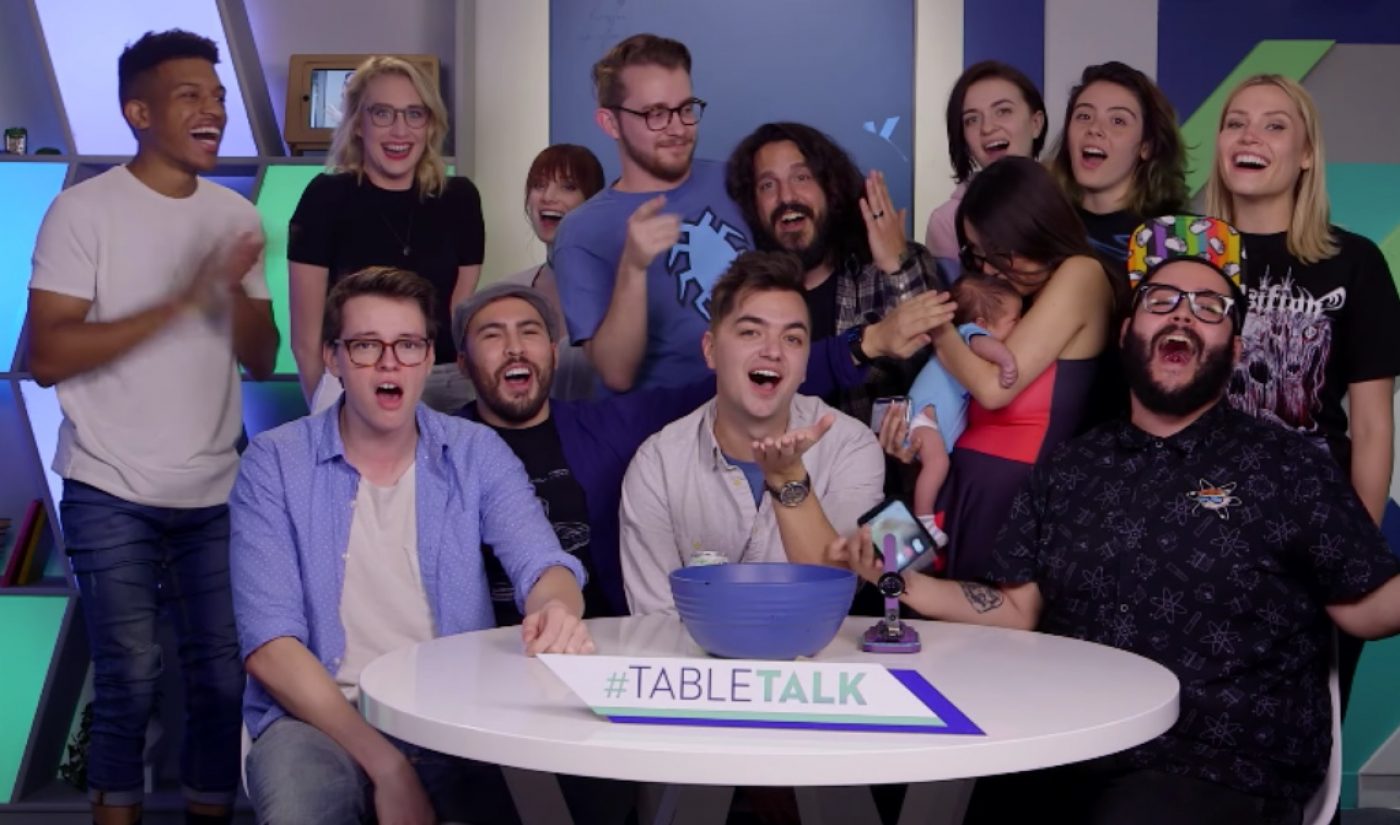 Last week, Philip DeFranco announced his decision to take a week off from his YouTube channel in order to give himself the time to sort out some “personal and business stuff” in his life. Now, we know about some of the “business stuff” he spoke of.* Tubefilter has learned Group Nine Media, the Discovery-backed venture that holds control of several major media brands, will shut down DeFranco’s SourceFed network while also rebranding Seeker Daily as the YouTube hub of its other portfolio company NowThis News.

The word out of SourceFed HQ is that layoffs were announced last week, with the SourceFed, SourceFedNERD, and People Be Like channels all getting the axe. In order to commemorate what might be the last SourceFed video ever, the offbeat news channel brought in several of its former hosts, including Elliott Morgan and Trisha Hershberger, for a very special episode of its Table Talk series.

Then, on Monday, the four current SourceFed hosts — Ava Gordy, Mike Falzone, Candance Carrizales, and Steven Suptic — got together to formally announce that the show they work on is indeed in its final week. In hopes of seeing SourceFed off with a bang, its last few days will include a final podcast episode and a big live-streaming bash, which will go live on Friday, March 24th at 5 PM EDT.

The decision to cut SourceFed comes among a flurry of major changes at Group Nine. The holding company, formed last year out of a reported $100 million partnership between Discovery and VC firm Lerer Hippeau Ventures — which has funded properties like NowThis, Thrillist, and The Dodo — will also rebrand the Seeker Daily channel for the second time in a year. By giving NowThis its own YouTube hub, Group Nine is helping the news publisher follow through on its plan to create more long-form content to complement the incredibly popular short-form clips it distributes on Facebook to its more than 10 million fans.

Both Seeker Daily and NowThis are known for utilizing the “explainer” video format, which could ease the transition between the two.That said, Seeker Daily’s 1.5 million subscribers, many of whom have been with the channel since it was known as TestTube, do not seem to be happy with the change, as an introductory video‘s like-dislike ratio indicates.

SourceFed initially launched as one of the projects funded by the YouTube Original Channels Initiative, and it ended up outlasting most of the other channels borne by that experiment. With DeFranco providing some star power behind the camera, SourceFed gathered a devoted following by offering a unique, personality-driven news show that thrived within the YouTube environment. In its first few years, SourceFed gathered a seven-digit subscriber count and won several Streamy Awards, but the channel’s viewership has recently dwindled. One potential culprit is high on-screen turnover; almost all of SourceFed’s original hosts left the channel years ago.

Originally, SourceFed reported to DeFranco Creative, but Discovery gained control of all assets under that umbrella in 2013. By 2016, DeFranco Creative had assumed the name SourceFed Studios, and Group Nine became the company’s owner that year.

It is our understanding that The Philip DeFranco Show, through which DeFranco has built himself into one of YouTube’s most personable and beloved stars, will continue on. We hope (and can only assume) that DeFranco will address the SourceFed situation in an upcoming clip.

*UPDATE 3/20 @ 8:55 PM ET: DeFranco let us know on Twitter that his time off had nothing to do with this SourceFed news.