How Chat Became Twitch’s Native Language — And Its Competitive Edge 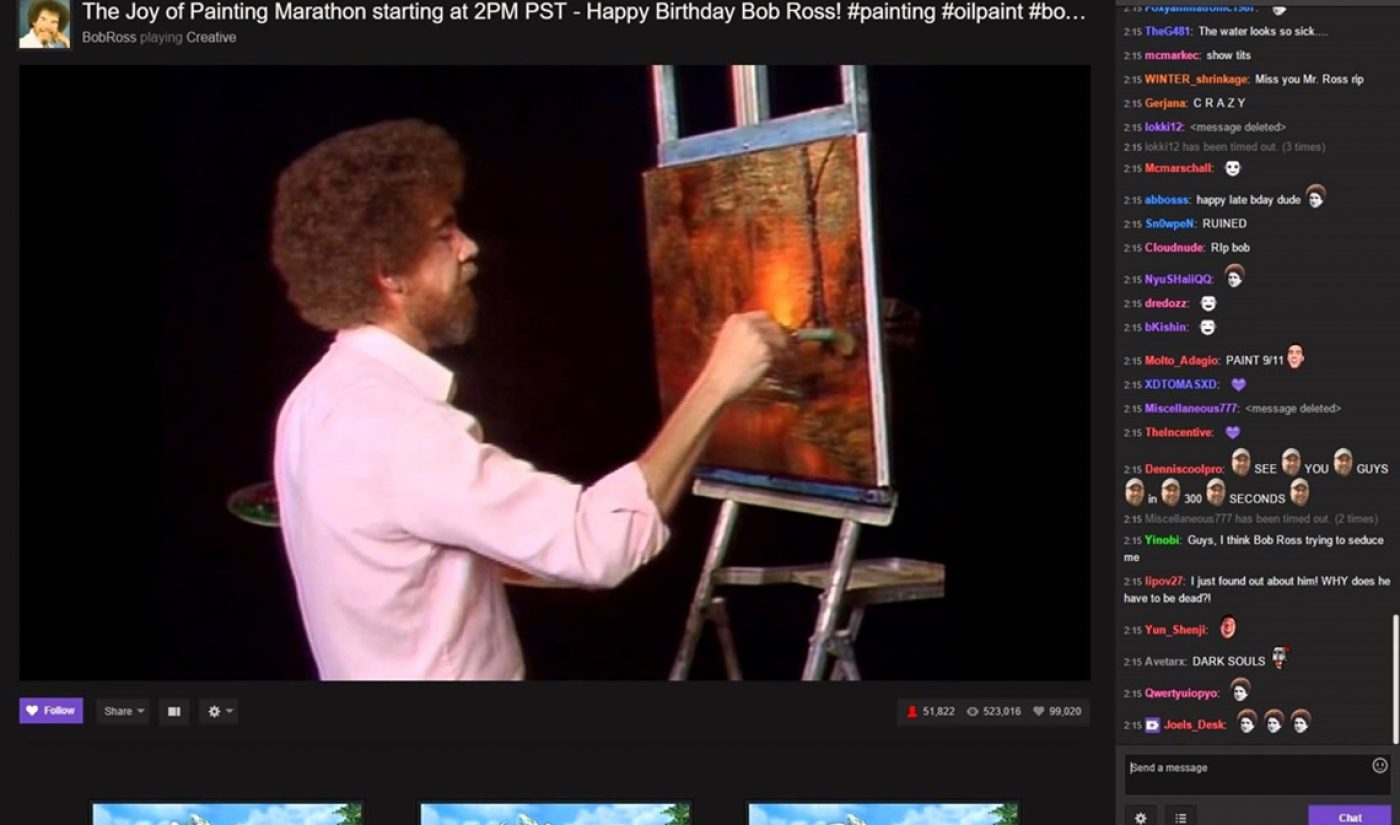 In February, Twitch launched a new feature called Chat Replay. Now, when the Amazon-owned live streaming platform’s users play their favorite live streams as on-demand videos, they can read the reactions of their fellow viewers at the exact moments when those reactions occurred.

Chat Replay is one of the latest instances in which Twitch has embraced its lively chat window as an integral part of its user experience. Twitch VP of Community Jacob Woodsey told Tubefilter that Chat Replay was a “popular request” from the site’s viewers (who number more than 100 million per month), and that’s a telling statement. On many other video platforms, comments are an afterthought. Instagram replies do little to start dialogues, and some YouTube comment chains are filled with so much hate that top creators have opted to turn them off rather than suffer abuse.

Twitch Chat breeds its fair share of hate speech and abuse, too, but it has also emerged as one of the streaming platform’s core features and a key part of its appeal. Chat, as Woodsey tells it, is a “unique language” consisting of small pictures called “emotes,” which appear on screen in rapid succession and can be applied to individual moments in both simple and complex ways. As Twitch begins to face challenges from upstart and rival platforms like YouTube Gaming, the nuances of its chat language are a big selling point and an undeniable competitive edge.

The Native Language Of Twitch

Twitch Chat has been around since the platform’s 2011 inception, when it was spun off from fellow streaming site Justin.tv (which it has since eclipsed and absorbed). At first, chatters were limited to a small batch of about 50 different emotes, but as demand has increased, so has supply. Twitch now lets its partners create custom emotes as they accrue high subscriber totals, while third-party sites like FrankerFaceZ offer a more democratic process, albeit restricted by strict guidelines. Now, Twitch recognizes about 50,000 official emotes.

Over the past five years, however, emotes have not just grown in number, but also in importance. The “Kappa” emote, which shows the face of a Justin.tv employee who helped design the platform’s chat feature, is used to denote sarcasm within individual chat messages. At the time of this post, it is the most used Twitch emote. On some days, according to independent database Twitch Emotes, Kappa appears more than two million times in chats around the site.

Kappa’s popularity has become so great that custom versions of it are rolled out to commemorate historic events, holidays, and major site updates. When Twitch streamed all 403 episodes of Bob Ross’ The Joy of Painting as one of the first projects from its Twitch Creative division, it unveiled a new emote called KappaRoss, which featured Ross’ signature afro atop the Kappa guy’s face. In just a single day, that emote was used more than 436,000 times.

“We view the Twitch emotes as a unique language created, adopted by and forever evolving alongside the community,” said Woodsey. “Like any language, it changes over time based on cultural movements and events. At Twitch that evolution is fast. Popular meme-based knowledge, broadcaster personality and trends expressed and trialed through pictorial emoticons have frequently become lexicon from high usage.”

The elevation of emotes into their own language has allowed Twitch Chat to take on a culture all its own, and the development of that homegrown personality has helped Twitch move out of its comfort zone. The most significant non-gaming initiatives the company has undertaken have come from its Creative wing, and those projects have used energetic chats to draw attention from around the web. Woodsey noted a quote from a New York Times article about Twitch’s live stream of a Julia Child cooking show: “Mrs. Child’s show was the appetizer,” reads the article. “The Twitch community was the main course.”

Much of Twitch Chat’s appeal is wrapped up in its emotes, but the feature’s growth is also spurred on by a second trend: The rise of interactive “Twitch Plays” experiences. The first and most famous Twitch Plays phenomenon occurred in 2014, when as many as 80,000 simultaneous viewers joined forces to play a hectic version of Pokemon Red. Twitch Plays Pokemon became an Internet smash hit, and it spawned an entire category of Twitch Plays streams, for which Twitch itself now offers official support.

The popularity of Twitch Plays Pokemon has encouraged developers to create interactive games in which the responses of Twitch Chat denizens actively affect gameplay. These projects are referred to as “Stream First” games, and Twitch is actively involved in their development. In March 2016, the streaming platform launched an initiative called Developer Success, which encourages designers to create Stream First games.

“While Twitch Plays are games where chat interactivity has been added as an afterthought, Stream First games are designed from the ground up for the live streamed experience,” Developer Success VP Kathy Astromoff told Tubefilter. “By enabling broadcasters and their audiences to play together in innovative ways, it turns traditional gameplay video streams into cooperative community experiences. SUPERFIGHT, Wastelanders, and Streamline are the inaugural Stream First games developed in close partnership with Twitch.

On the surface, Twitch emotes and Stream First games may seem to have little in common, but the platform was only able to realize the latter trend because it had already developed a culture based around its chat window. Twitch Plays and Stream First games require viewers to input commands at a frantic pace in order to create a worthwhile experience. In the case of Twitch Plays, the massive number of chat commands submitted by viewers generate the sort of chaos that makes something like Twitch Plays Pokemon into an Internet sensation. Stream First games, on the other hand, require active viewer participation in order to create a large sample size. An in-game poll asking viewers to vote on a specific topic is much less fun if it only gets a few responses.

These instances of in-game crowdsourcing would be much less interesting and profound on a site with less emphasis placed on its comments section. On Twitch, those streams fit the local culture perfectly.

“A social network for the next generation.”

In the past, Twitch Chat existed as a local curiosity on a category-specific website, but other digital content providers are now clamoring to own a piece of the video game live-streaming pie. As they do, Twitch Chat becomes Twitch’s killer edge. The most serious Twitch competitor is YouTube Gaming, which the world’s largest video site launched in 2015. That hub has an intuitive design, plenty of appealing live streams, and even a chat window of its own, but it lacks the culture that has organically developed and been proactively nurtured over five years of custom emotes and interactive gaming experiences.

“Chat has been an integral part of the Twitch experience since the platform launched, so the community has transformed its usage of emotes into a native language,” said Woodsey. “Because languages are not created overnight and there are narratives behind many of the popular emotes, it’s hard to compare with other platforms where chat is less defined and lacking history.”

Could YouTube Gaming or some other competitor eventually develop its own chat culture, thus allowing it to offer the same communal appeal viewers currently find on Twitch? That’s certainly possible, but what makes Chat such a strong feature is that it now transcends video games. As the Bob Ross and Julia Child streams have shown, Twitch Chat can turn nearly any video into a fun experience. Even if some other site becomes a go-to destination for gamers, Twitch’s culture will live on.

“The live interaction through chat between the broadcaster and their audience, or the melting pot of discussion between the audience themselves in relation to what is happening on stream is highly engaging, imaginative, creative and innovative,” said Woodsey. “Chat is a cornerstone in defining Twitch as a social network for the next generation.”