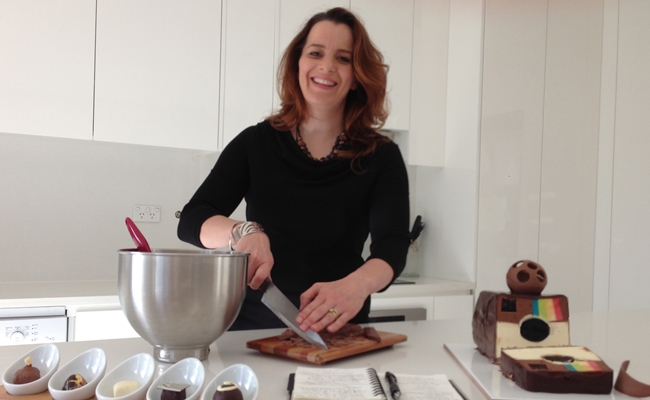 YouTube Millionaires: Ann Reardon Knows ‘How To Cook That’

Ann Reardon loves to bake, and when she fires up her oven, things tend to get a little wild. The talented Aussie is the host of How To Cook That, a channel within the Kin Community network that features ornately-decorated confections. Reardon dresses up her creations to feature cartoon characters, shapes cakes like social media logos, and devises giant versions of classic candy bars. She also adds in some easier recipes for her more conservative viewers. No matter which category you fall in, there’s no denying Reardon’s savvy in the kitchen. Here are her thoughts on her recent ascension past one million subscribers:

Tubefilter: How does it feel to have 1 million subscribers? What do you have to say to your fans?

Ann Reardon: One million is such an unfathomable number, it is super exciting and a huge responsibility at the same time.  The How To Cook That community are such lovely people, they’re all so supportive and encouraging which is really the vibe that I was going for on my channel.

TF: Your website says you’re a food scientist and ex-dietitian (as well as a previous youth pastor!) Did these past careers have any impact on why you wanted to start a food blog and then a YouTube channel? How did that process happen?

AR: I’m actually a qualified food scientist and dietitian but I left that field to work with youth in a low socioeconomic area.  I absolutely loved it and have so many great memories.  But our budget was extremely tight so it was during this time that I taught myself to edit videos for the youth ministry, as well as self-catering for lots of events.  Over time some of the young adults asked if I could teach them how to cook.  A group would come over and we’d all bake and have a great time in my kitchen.

I thought about doing a cooking blog but it wasn’t until I had my third son that I started the website https://howtocookthat.net.  I wrote a recipe post every week during night feeds and did occasional cooking videos for more complicated recipes. These videos were too big to upload on my site so I put them on YouTube, purely so I could embed them onto my website. Over time the website grew and the videos were becoming very popular as well, so I started uploading weekly videos with my recipes.

TF: Why do you think baking appeals to so many people?

AR: I originally thought that people would watch my videos to learn how to bake.  But so many people say they never bake anything I make, they just like watching.  They enjoy watching something seemingly impossible, like a 3D minion or Twitter cheesecake, all come together before their eyes.  Then there are others who are keen bakers. They love the joy of cooking great food and showing up to the party with a crazy sweet creation.

TF: What was the most difficult video of yours to make, either because of a complicated recipe or because of technical difficulties?

AR: I used to film on my phone and it is not designed for long shoots.  When I went to edit the Instagram dessert some crucial footage had green pixels distorting it.  I had to go through frame by frame to find non-corrupted footage.  That is why the all-important slice into the mousse to reveal the Instagram logo inside is such a short part of the video.

When I film a complicated cake I only make it once – I don’t pre-make it or practice, so what you are watching on YouTube is me making the cake for the first time.  For new dessert recipes that I’m developing I’ll often test 1/4 of a recipe and play around with ingredients until I’m happy.  This usually works fine, but when I made the giant Snickers bar, the caramel on a larger scale took too long to cool down, over-heated and failed badly. I had to remake it, but that meant I had a spare huge Snickers bar in my kitchen.  I called a friend and asked them if they wanted to pick up a giant Snickers – they were happy to oblige.

TF: How do you set yourself apart from other foodies on YouTube?

AR: My subscribers say they like the channel because it’s creative, unique, educational and varied. It is not a copy of another channel or things you’ve seen before.  If it is a simple recipe like donuts then we make it more fun by throwing in giant explosions and firemen.

TF: What would you say to someone who thinks they can’t learn to bake or cook?

AR: Having YouTube tutorials makes learning to cook accessible to everyone.  Look at some of the photos on my blog that people have submitted of cakes they’ve made.  So many say they have never used fondant and never made a cake from scratch before, but their results turn out amazing. At a meet-and-greet in Sydney recently I met a 15 year old subscriber who started a cake shop after learning from the videos. Now people are buying his cakes.

TF: Your family shows up in several of your videos, including your celebratory one million subscribers video. What do they think of your YouTube career?

AR: I have the best husband in the world, I would not be able to do what I do without his amazing support.  My kids like having me home, it’s a fun house to live in and always lots of treats.

TF: Cooking and baking obviously takes a lot of time in and of itself. What goes into preparing and shooting one of your videos?

AR: I film and edit the videos myself.  Filming can take anywhere from 5-9 hours depending on what I’m making, or longer if lots of people are involved, like with the frosting taste test videos.  Editing takes the best part of a day and after that I upload it and type in the captions (for people who cannot hear or who speak other languages).  Then, of course, there’s the dirty dishes to wash.

AR: In 2015 we have a trip to the USA planned and we will be releasing the fourth animation for our augmented reality ‘Surprise Cakes‘ app – an app that actually animates any birthday cake with 3D dragons, fireworks or unicorns. At the meet-and-greet we printed out the huge markers and people were amazed as these enormous animated dragons and unicorns were bursting out of the floor.  And we have some great giveaways and another really big secret on the way – our subscribers will be the first to know when I’m allowed to say.