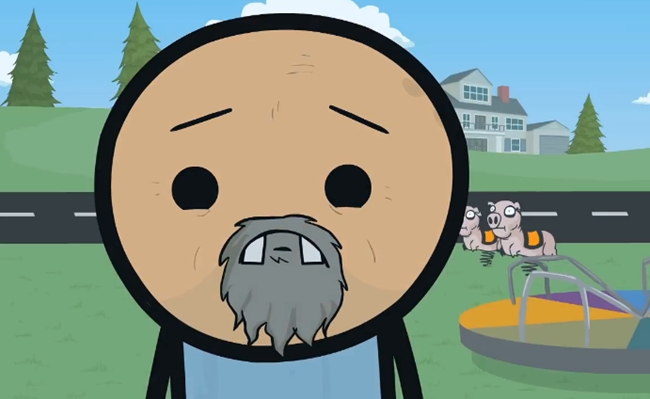 The politically incorrect animations of Cyanide and Happiness have officially arrived at a new format. The webcomic-turned-YouTube channel created by Rob DenBleyker, Kris Wilson, Dave McElfatrick and Matt Melvin has released the first episode of The Cyanide and Happiness Show, which collects several animated sketches across a ten-minute installments.

Cyanide and Happiness’ YouTube channel, which is based off its vulgar webcomic, has 3.6 million subscribers and is partnered with Collective Digital Studio. The channel is dominated by short comedy sketches that repeatedly show off new, imaginative ways to kill off stick figures.  In 2013, after some unfruitful talks with TV executives, the comic’s founding quartet headed to Kickstarter to turn these sketches into a long-form show.

They hoped to “create an online show that everyone in the world can watch anytime they want,” and by raising a whopping $770,309 from their fans (more than three times their initial goal), they were able to do just that. The first episode of The Cyanide and Happiness Show includes three distinct sketches, which are linked together by short vignettes that imagine a world where bugs are humans and humans are bugs.