On The Internet, Is Fame For Sale? 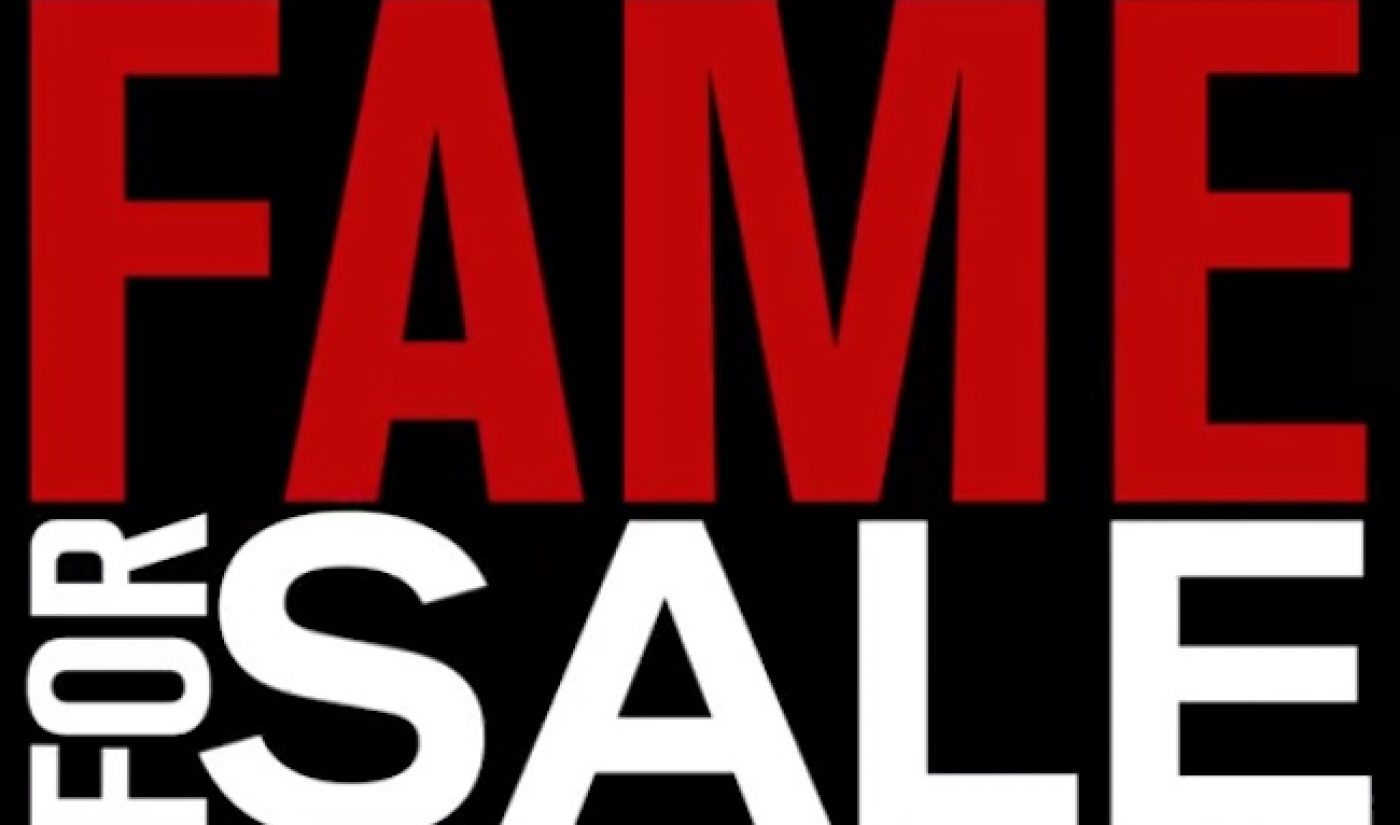 There’s a condition and a name for the ailment from which many of us suffer. It’s called Social Media Anxiety Disorder (SMAD)—when a person finds themselves constantly locked into their social media accounts, when their heart beats a little faster when they get that tweet or notification, or when an individual feels a small sense of accomplishment whenever he or she acquires new followers, views, or fans.

As social media accounts and statistics become more a part of our daily lives and SMAD becomes more common, so does something else—fame, for sale.

You might have heard of them. The handful of YouTube stars making millions of dollars right from their bedrooms.

Jenna Marbles, one of the most popular YouTubers, called what she does “ridiculous” on Good Morning America. Ridiculous maybe, but people are captivated by social media. And here’s a little secret: Buying millions of YouTube views and Twitter followers is just an internet connection and a few clicks away.

In 2012, YouTube cracked down on major companies and record labels that represent artists like Rihanna and Justin Bieber. Collectively, they removed over 2 billion fake views. Universal Music Group reportedly lost one billion of its seven billion views, while Sony lost 850 million.

“YouTube has now become the number one source of music. More people listen to music on YouTube than any other source,” said Dax Kimbrough, Adjunct Instructor of Music Industry at USC. “Social media and its exposure are really invaluable to artists.”

In his Downtown Los Angeles loft, Sergio Flores gets into costume for the character he created called Sexy Sax Man.  His viral video, where he is dressed in black leather pants, no shirt, a pair of suspenders and a fake mullet, while playing Careless Whisper in public places, has over 21 million views.

“[The] Vitamin Water [commercial] of course was like a highlight for me, crazy two-day shoot, it was like the whole movie experience, full production crew, it was really awesome,” Flores said about the experiences that followed his viral success. “I’ve done Late Night with Jimmy Fallon; I got to play with The Roots. I’ve gotten to play at Bonoroo music festival, I’ve gotten to hang out with Neil Young … The video has been a blessing.”

“I knew people could buy Twitter followers, but I didn’t know about the YouTube thing,” Flores said. “…If it’s like a cool video and you buy views for it, and it jumpstarts it, and tricks people into thinking that a lot of people are watching, and so they start watching it, it might work. I haven’t looked into how YouTube buying views works. It might work for some people, I didn’t use it. The video stands, it’s there, it’ll run forever.”

USC Social Media Professor Karen North explained how a big following can further a person’s career or image. “There are so many reasons it’s important to have large followings, depending on who you are,” North said. “For people who are business leaders, and want to develop a reputation as an influencer or opinion leader, then Twitter and Youtube, Facebook, Instagram, all those, allow them to speak to larger groups of people and to develop a reputation of being an expert or develop the credibility of being the person people are listening to.”

When the music video parody called ‘I’m Not Gay‘ hit YouTube, it became an instant sensation, reaching nearly one-million views and winning an award at the Palm Springs Film Festival. Ryan Turner, who directed it, says there was a point when he was buying fake views.

“Early on, if I had a big release – like this video I made about an alternate ending to Harry Potter – … I didn’t have any means to get it viewed, so I bought around 20 thousand fake views,” Turner said. “I was like ‘Well, it’s going to make people bring them to [the video] and after a while they’re going to see it was worth it. The views might have been fake, but they’re going to add real ones on top of it. And it’s at like one-hundred-thousand right now.”

“If you’re releasing a new music video,” North said, “you don’t have a following yet, it’s a brand new release, so if you buy thousands of hits, then when people find out the band has a new song, they’ll search for it, and yours, if you buy enough views, will pop up first, and then it will organically gain more and more hits.”

Turner no longer buys fake views. He says it builds a fake image and leaves him “unhappy.” “It’s really depressing to put that money into getting fake people to see it,” Turner said. “It’s like you’re building this bubble for yourself that is eventually going to pop, and no one is going to have seen your videos— that’s just the reality.”

“There’s a huge, huge, cottage industry that has sprung up of people who have figured out how to sell following on all the social media platforms,” North said. “It’s totally legal, you get what you pay for.”

Experts can point out which Twitter followers are fake, and it’s not that hard to spot. One account for example, belongs to “Charlie” and has no description. He’s only tweeted three times. He has six followers, but he’s following 495 people. This account is clearly a fake.

Vince, who did not want to reveal his last name, is owner of the website “InTweetive”, which sells Twitter followers to people wanting to enhance their image. He declined to show his office, but agreed to do an interview over the phone.

“Yeah it’s very popular,” Vince said, “we get about 100 to 200 orders a day.” What’s more, he says Twitter has no problem with people buying followers. “So far we have never had any contact with them. What Twitter is after is actually the companies that make fake accounts, software, to build fake accounts on Twitter.”

When asked if he has any famous clients, Vince said a Glee actress, whose name he can’t remember, and famous socialite Paris Hilton, bought followers from him through a company called Inclusive Inc.

As far as why a big celebrity would need to buy fake views, Vince replied, “Did you read about the election, Obama buying Twitter followers? They said that half of his followers were fake.” He was referring to a USA Today article which claims that President Obama’s campaign used fake followers to convince people that he was a lot more popular than Mitt Romney.

Who Else Is Buying Them?

If what he says is true, the famous heiress and the president are not alone. Radar Online reported that country singer Leann Rimes drew suspicion when she suddenly had 50 thousand new followers in just one day.

“In April we noticed she had a dramatic spike in her number of followers,” said RadarOnline News Editor Amber Ryland. “Pretty much she gained 50-thousand followers overnight, which is unheard of on Twitter. So we did a little digging and found a lot of people were upset about these new followers and were claiming that she had bought them.

“So despite the criticism Leann got in April, for these random followers, a month later, we checked up again, and she had gained 100 thousand followers this time. We took screen-grabs, and there are certain companies that actually follow celebrities and show the spikes in their twitter followers, and 100-thousand she got the next month, out of nowhere, and again, many of them looked like paid followers…”

Coming under the criticism of Ryland and sites like RadarOnline for allegedly shady social media practices is something Turner never wants to happen to him. He will stay up editing a national commercial he directed during the day and hopes the hard work and lack of sleep will pay off and earn him a fan base … the honest way.

Frank Elaridi works on the assignment desk and as a freelance producer for ABC Network News, which includes World News with Diane Sawyer, Nightline, 20/20 and Good Morning America. He also contributes as a print journalist for ABC News Dot Com.

To see a video report of this piece – produced by Frank Elaridi and David Beebe – you can watch the very first video embedded at the top of this story, or click right here.