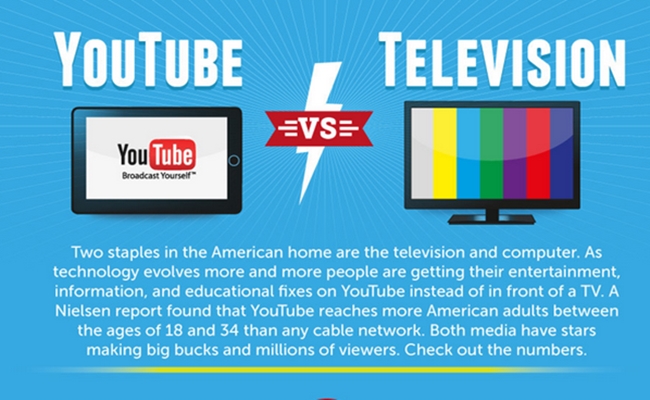 It’s overly restrictive and binary to view TV and online video as natural enemies, with one destined to ‘conquer’. The smartest entertainment executives understand that TV and the Internet are two sides of the same coin that must work together to ensure maximum quality.

But that’s no fun. Let’s make them battle each other, right? A new infographic from the YouTube Downloader blog matches up the viewing habits of YouTube users with those of TV watchers.

TV has a clear lead in most standard statistics. The average American watches more than four hours of TV a day compared to 46 minutes of YouTube. The top viewed TV shows each week routinely score more than ten million viewers, a figure that eclipses the subscriber counts of most YouTube creators. As far as money is concerned, the top TV stars make millions more than their online counterparts, even with a generous estimate of each YouTuber’s wealth.

Of course, there’s evidence of a paradigm shift. The average 18-24 year old still watches 84 hours of TV a month, but YouTube users are watching a billion videos on mobile each day (while only 30 million people watch TV on mobile devices) and average monthly YouTube watch time is accelerating one hour per year faster than TV watch time. Online video has a long way to go before its top stars earn $16 million a year (and the online platform that achieves this feat probably won’t be YouTube), but young people are consuming their favorite medium at a torrid pace.

The full infographic is embedded below. Note that it features some weird comparison and questionable data; in particular, YouTube Downloader Blog moved the decimal points two places to the left in the data they pulled from our monthly YouTube charts. Why? I don’t know! Maybe you’ve got a guess.