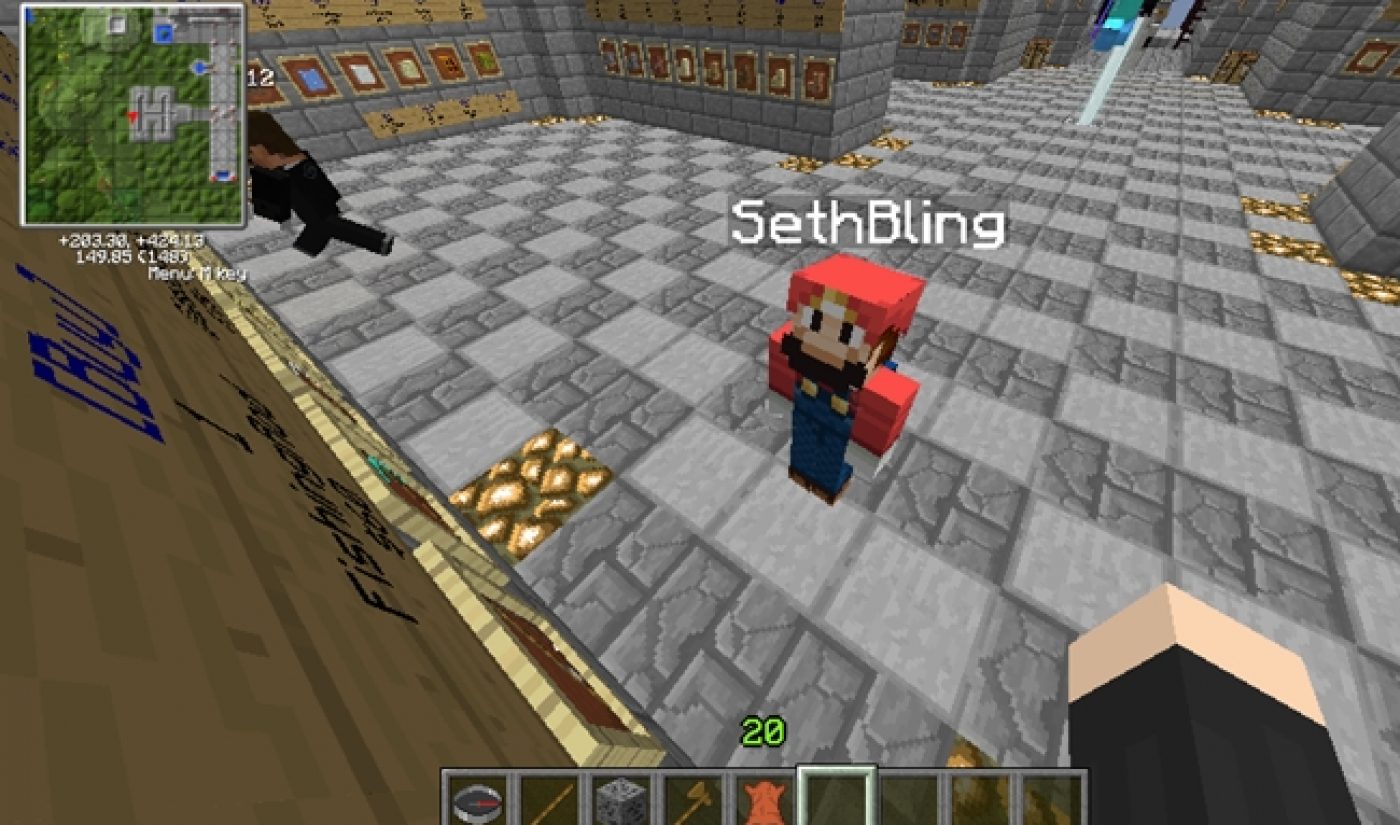 Minecraft is without a doubt the most popular video game on YouTube, with creators like SkyDoesMinecraft reaching the top of our Tubefilter charts week after week. Minecraft is so popular that creators can make it big by focusing on individual aspects of game.

One of those specialists is SethBling. Seth is a Seattle resident, a former engineer at Microsoft, and a master of one of Minecraft’s most complicated elements: redstone. By teaching other players how to use this ‘programmable’ resource, Seth has built a YouTube following in excess of one million subscribers. We talked to Seth about his love of Minecraft and his mastery of the confusing red rock.

1. How does it feel to have one million YouTube subscribers? What do you have to say to your fans?

Moreso than any other number, a million is THE threshold in YouTube. It just feels so crisp to say. It’s been my primary goal for well over a year now, and I look back with pride when I see that I’ve accomplished it. To my fans: thanks for allowing me to turn my obsessive hobby into the best job in the world!

2. When and why did you first decide to start playing Minecraft?

My roommate was talking about it and I thought the idea of a completely moldable world was really cool. I actually played for several hours without looking at the wiki because I didn’t want to spoil the game, and my roommate came home to see me huddling in a dirt castle. I hadn’t figured out how to craft. Needless to say, I looked at the wiki shortly thereafter.

3. Why do you think Minecraft has become the most popular video game on YouTube?

Minecraft is a game that’s very easy to get into, but then has endless possibilities once you’ve mastered it. There has never been another sandbox game with such a strong ‘fun’ element. People see me do amazing things with the same blocks that they use to build their huts, and they can really relate to what I’m doing, even without understanding how to do it for themselves.

4. In particular, you’re known for your redstone expertise. Why do you think so many players struggle to understand redstone?

Redstone is just complicated. It requires a lot of analytical and logical thinking. I have a bachelors degree in computer science, and I still don’t feel like I’ve completely mastered the red substance.

5. Do you think your experience as an engineer at Microsoft has helped you master the ‘programmable’ elements of redstone?

Absolutely, along with my college training. These things teach you how to approach difficult problems, break them up into simpler problems, solve those simpler problems, and combine the solutions. Not to mention I do a fair amount of programming as part of my hacking of the game.

6. Do you ever regret quitting your job to pursue Minecraft videos full time?

Not once. I’m my own boss, I set my own schedule, and I play video games all day. I like programming, but it can’t compare to this.

7. Do you think you’ll keep your channel to just Minecraft videos or would you like to post videos from some other games?

Until I can find another game with the type of technical flexibility that Minecraft has, it’ll be a one-game channel. There are some other games out there that kind of fit (e.g. Garry’s Mod), but they don’t have the relatability that Minecraft does. I’ve also considered getting into map-making for other games (e.g. StarCraft II), but again, most people don’t use the map editor, so it wouldn’t be very relatable.

8. What’s up next for SethBling? Any interesting plans for the future?

Make awesome videos! Since I came back from attending VidCon with my network, VISO, I feel completely reinvigorated, and I just want to make the coolest stuff I can and share it with the world!

On Deck (channels that will soon reach one million subs): Anthony Padilla, Shut Up Cartoons, Genierock.