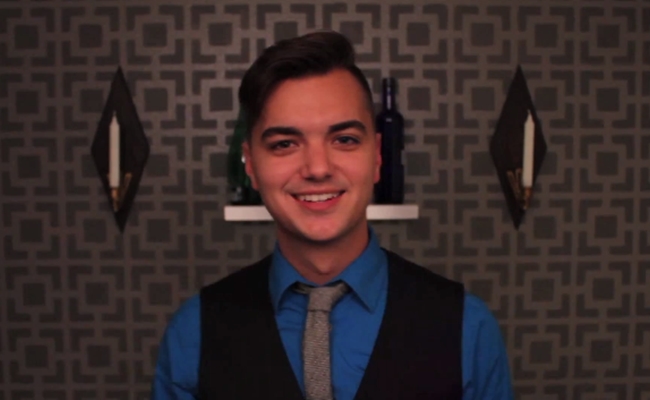 Elliott Morgan is raising his glass. The SourceFed host has debuted Happy Hour, a thrice-weekly show airing at 5PM ET / 2PM PT on his personal channel where he will talk to his audience, drink in hand, with no jumps cuts or major edits involved.

Though Happy Hour seems like an unscripted adventure, Morgan does rehearse what he has to say before delivering his single-take monologue. But that only makes the series that much more impressive to watch. The use of jump cuts in online video (or, as Morgan calls them, “the laugh track of YouTube”) is rampant. Not that there’s anything wrong with that, but it’s refreshing to see a good-looking show with great audio that bucks the trend.

In the first episode, we get his reflections on the new show, a terrible (in a good way) joke about the flu, and a toast to corgis (hear, hear!). Morgan also supplements each episode with a featured beverage, which he says will always be a beverage “someone over the age of 21 would drink, or someone under the age of 2.”

The name Happy Hour seems like a reference to these drinks, but it is actually much more. We asked Morgan about his multifaceted title of choice:

“I decided to call it Happy Hour for a few reasons, so buckle up cowboy. The first is that I believe people connect best in environments like happy hours. We spend our lives at school or work and we build up barriers, and we build up preconceived ideas about others. But when you gather around a drink, or a video game, or a sport, you let your guard down and your brain turns on in a weird way. The other reason is that each episode will be an hour long. I’m just kidding. Can you imagine? That would be awful. But no really: the other reason is I’m a huge fan of whiskey. Like, it’s just. So. Good.”

Morgan will still continue all of the normal vlogging he does on his personal channel, as well as his regular role on SourceFed. “That channel was a blank canvas, and I, along with Joe Bereta and Lee Newton, was able to give it life and a voice and, thankfully, success,” he said of the immensely popular YouTube Original Channel. “Nowadays it’s this huge, amazing thing, and I’m incredibly proud of it. I’m hoping to take that same voice and flesh it out more with Happy Hour. More weird stuff, less editing, no jump cuts. It’s gonna be nutty.”

Pour yourself a drink and watch and subscribe to Happy Hour here.