Chris Hardwick Wants You To Get to Comic-Con By Foot 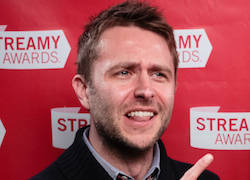 “To me, going to Cons as a kid was all about having a safe haven—a place where like-minded folks could come together to celebrate nerdly passions and accept each other for the oddball (by the larger and more boring sector of society’s standards) stuff we were all into,” Hardwick wrote on the YouTube Blog.

Segments are purchasable in quarter-mile increments, and space is limited to about 500 running slots. Participants better come decked out in their best Star Wars-themed running gear to make the best of the $500 ticket, though runners will also receive a Star Wars Ultimate FX lightsaber along with other gifts celebrating the Force and Comic Con.

“The Course of the Force lightsaber run is a great cause that combines fitness with helping others, principles that aspiring Jedi Knights can embrace,” said Kayleen Walters, Senior Director of Marketing for Lucasfilm. “We have long supported the Make-A-Wish Foundation, and this is a great opportunity to raise funds and awareness while letting Star Wars fans celebrate their favorite saga.”

The entire relay will be live streamed on The Nedist Channel on YouTube, a partnership between Nerdist Industries, The Jim Henson Company, and Broadway Video.