Behind Cone-ing: Alki Stevens and the Rise of Online Pranking 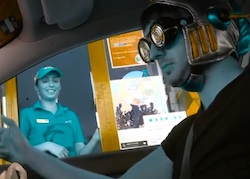 First came planking, then came owling, then leisure diving, then bat-manning, and now Melbourne Australia’s Alki Stevens is making people laugh and scoring youtube views worldwide with his “ING” craze which has generated some buzz with it’s signature move “coneing”, or ordering an ice cream cone at a McDonald’s drive in and taking it from the attendant by the ice cream, not the cone. Yes pranksters are getting their hands dirty, but the fad has caught on with the mainstream, so much so even Justin Bieber was even recently known to “rip a few cones.”

In addition, to starting up Internet memes including “gnoming,” “fruiting,” and “trophying,” Alki has also started his own online  web series The AlkiStevens Show, where he features other pranksters from around the world. It’s kind of like a crowd sourced 21st century Jackass.

We caught up with the Aussie prankster to climb a little deeper inside the growing world of performance video pranking. He is a man of few words, so we’ll read between the lines.

Tubefilter: Describe how CONE-ING came into existence?
Alki: I was making a pilot for a TV prank show about 5 years ago and thought it would be a good idea.

Tubefilter: Many commenter’s have noted that the best conings have you as the star? How do you keep you cool when your in the act?

Alki:I got a lot of practice with things like that whenI was at school and I’d lie about why I didn’t do my homework etc. I’m a good liar.

Tubefilter: What inspired you to get into web comedy?

Alki:I’ve wanted to be on TV since i was 2 years old. Comedy is the only thing I can do. Whether I make an old lady at the shopping mall laugh or millions on YouTube. I go to bed happy either way.

Tubefilter: Do you have a favorite coning experience of your own?
Alki:My favorite is when I placed an empty cone on top of an ice cream and stared at the worker. She was very confused.

Tubefilter: You’ve taken cone-ing and brought it to the masses. With some of the reaction videos now getting serious views as well, what you are doing to support the sub-culture?

Tubefilter: Between Coning, Ignoring, Trophying, Gnoming (which is pure hilarity), and fruiting are people at drive in’s starting to recognize you. What lengths have you gone to hide your identity?

Alki:I drive very far now. Sometimes I’ll drive around up to 3 hours just to get one workers reaction. It’s not that big down here in Australia so I usually get away with it.

Tubefilter: Do you have any advice for all the pranksters and comedians out there?
Alki:Be persistent.