‘A Day in the Life’ of Richard Branson (Is Pretty Cool) 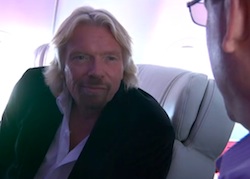 Morgan Spurlock is hardly new to web shows, in fact the Oscar-nomiated filmmaker (Super Size Me) was one of the first to leap in, with his man-on-the-street competition series I Bet You Will way back in the choppy video days of 2000, that would eventually get picked up by MTV.

Now the filmmaker returns to the internet—and its much improved bandwidth—for distribution of his latest project, A Day in the Life which premiered yesterday on Hulu. The series of half hour mini-docs, delivered in easily watchable 22-minutes episodes, with each one tackling a different notable personality over a 24 hour period. First up for Spurlock is Virgin founder/CEO—and poster-child for adventureous billionaires everywhere—Sir Richard Branson.

May 25 and 26 of 2011 were the days in question—it’s really ’24 hours in the life’ but the chosen title was a little more catchy. The episode started off just like any of yours or my typical days do—scraping together a few billion dollars to buy some Lloyds Bank branches then dinner in London with The Queen and President Obama, followed by a flight early the next morning back to the States.

First thoughts are, this feels a little like a long-winded Virgin commercial, but then I had to remember that Branson’s life pretty much is an extended Virgin commercial. His jaunting, fearless lifestyle reflects the spirit of the brand and vice versa. So I’m willing to go along with all the generous shots of the cushy Virgin Airport Lounge (how do I get in there?) and attractive staffers saying hello.

In all this debut episode does provide a fascinating look into the life of a celebrity CEO like Branson happily playing the public-facing cheerleader for his company’s battles against much-larger entrenched competitors, like the major airline carriers, as he adds new routes to Virgin America. “Despite the name, we do go the whole way,” he quips in one of the dozens of press events he attends that day. Towards the end of the episode we see an intimate pitch meeting with Adrian Grenier, trying to get Branson to join the Board of his new website startup.

Variety’s Andrew Wallenstein was on NPR yesterday talking about how Hulu’s A Day in the Life and others like Netflix’s upcoming House of Cards could signal a shift in the way streaming platforms operate. “It’s the kind of thought-provoking work that could’ve shown up anywhere from HBO to FX, but it was Hulu that developed and financed it,” said Wallenstein. “And the company is not the only video streaming platform making shows.”

It’s one of Hulu’s first original series it has funded, something we’re expecting to see much more of as the network looks to diversify off of the heavy renewal license fees that come with its premium TV content offerings. “It’s not only a cool idea and we have faith in Morgan, but we also know his audience is there,” said Andy Forsell, Hulu’s SVP of content acquisition.

Branson, posting on his blog today, said, “I’m a big supporter of new and exciting ideas that challenge the norm. So I couldn’t refuse an opportunity to work with award-winning independent filmmaker Morgan Spurlock and Hulu, an adventurous online TV network that intends to shake up the TV market with its original entertainment content.”

Spurlock is bullish on the convergence of media, particularly with the rise of online video consumption beyond the laptop. As he told Shira Lazar in a recent CBSNews interview, “Ultimately I think it’s just going to be one tube. It just going to be one window. Everything’s converging.”