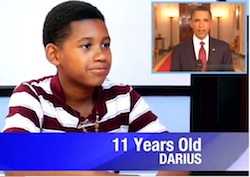 Let’s face it, the low hanging fruit on YouTube is pop—music, TV, reality stars, blockbusters—whatever is consuming an uneven share of our vocal chords makes for prime targets in online video. Hundreds of channels looking for material to program in a relentless deluge of almost 24/7 video. But sometimes, it’s the zig while other zag that scores some heavy attention.

Instead of taking on their usual suspects of viral video stars, YouTube stars and trainwreck TV stars, The Fine Brothers opted this week to shift into some hard news for their Kids React web series. The Bros. went right for it, Osama Bin Laden. To be fair, the video was actually President Obama’s speech to the nation from last Sunday night announcing the death of the infamous terror leader, but the subject was still a sharp one.

The video (below) already has over 800,000 views on YouTube since its release on Sunday, with a staggering 17,499 comments. And mainstream media have been all over it—TIME, Entertainment Weekly, CBC, Jezebel, The Huffington Post, SF Chronicle and CBS News.

Rafi and Benny Fine didn’t shy away from some rather heady questions, like “How did you find out that Osama had been killed?”, “How did it make you feel when you found out?”, “What do you think of people celebrating his death?” and “Should they release the pictures?”

“He’s a camper, like in Black Ops,” answered 12 year-old Landon Gilley about Bin Laden’s shadowy terror tactics. Others replied with more measured answers, “I don’t think that they should [release the pictures] because maybe others will hate us even more,” said 9 year-old Elle Nicoletti.

10 year-old William Sherman, who comes off remarkably mature for only a decade of life behind him, shot some behind the scenes video (below) of a recent Kids React shoot. His camera work suggests he may have picked up the coffee itch a little early, but as he reminds us, he’s only 10.

Tubefilter: Were you surprised at how broad the interest would be in the Bin Laden episode?

The Fine Brothers: We did this episode due to feeling it was an important moment in history to capture from a child’s point of view to teach us all something vs. thinking of it as a video that will reach across demographics and websites/traditional press etc. That being said, we anticipated this to be big thanks to our built-in audience, reputation, success of the show thus far, and knowing how to market, but we’d be lying if seeing Glenn Beck discuss the entire episode on his program was something we expected would happen. As the show evolves it is proving itself to be relevant in a much larger way than just online.

Tubefilter: Did you have any internal hesitations about doing the episode, especially with kids?

FB: No hesitation whatsoever. As long time viewers of us can attest to, we can be among the most controversial producers on the web, and are passionate for social issues/social change as well as social satire. When the President made his announcement, we already had a scheduled shoot a couple of days later, so we knew we had to do it, and also knew the amazing kids we have on our show would open our eyes to things we never even anticipated, and they certainly did.

Let’s remember though we created and direct the show, it is fully and completely unscripted and raw, and it’s the kids that should get the same amount of kudos for this and all episodes. Their thoughts and opinions make us think as much as they entertain us, and showcases something we have firmly believed our whole lives, that kids have a voice that we should be listening to, and what they say can impact the world in ways adults can’t. Especially as we’ve cultivated a young audience for our other content as well, we’ve learned the way to reach kids is to not dumb things down or talk down to them – let their opinions, their voice, their perspective guide you. This show is a testament to that and we stand by it.

Tubefilter: Do you think you’ll try more hard news topics with your videos?

FB: It has always been the intention with KIDS REACT to be a source to peek into our current time in history through the eyes of children, and though thanks to it currently being only on the internet/YouTube we play more on virals and memes, but from the very first episode we were discussing politics and President Obama, and in other episodes discussed homelessness, etc. This episode is not the first time we have dealt with serious subjects, though clearly this is a much larger issue to the world at large, and also with us now being a weekly show and one topic a week, allowed us to really dig deeper. So the answer is yes, expect more real world issues to appear as the show continues, though fear not, most of the time your favorite virals and YouTube stars will be featured on the series as well.

Tubefilter: Do you think this is the most popular of the Kids React series?

FB: No. The most popular episode is the Kids reacting to Rebecca Black’s music video “Friday”, which continues to showcase just how big “Friday” really continues to be. That said, this episode has gotten the most press from traditional media than the other episodes, and every week the show seems to pop up somewhere new. Big thanks to the many websites and blogs that have supported the kids and the show from episode 1, we look forward to the continued growth of the show, and capturing America in this time in history through the eyes of the next generation. Big things hopefully to come!