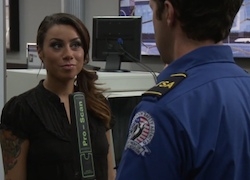 Rani Aliahmad and Rob Shalhoub formed Trend Media in June 2009. The pair of entertainment industry professionals launched the production company with the familiar plan “to create high-quality content for new media audiences on a cost-effective basis by leveraging key industry relationships and resources.”

Trend Media’s first and only completed production to date was greenlit in February 2010. It’s a workplace comedy that centers on the awkward airport hijinks of a team of Transport Security Administration Agents. It’s called Homeland Insecurity. The punny tagline describes the program as, “A comedy series about airport security workers with tons of baggage.” Deadline reports CBS just picked it up.

Sony TV is slated to produce the TV adaptation, with Josh Greenbaum and Ben McMillan on board to continue writing the series.

Homeland Security was shot on a $70,000 budget. Alaiahmad and Shaloub hoped to turn a profit with the show on the web, but only as a backup plan. Here’s how they explained their production and pitch process to Nellie Andreeva at Deadline:

“We thought the best way was to develop projects that are meant for television, scale down the production and shoot a short-form presentation. It’s nice to get (the presentation) in front of TV executives instead of asking them to envision what the project is about…If a show doesn’t scale back to television, we can always try to recoup our investment through new media distribution.”

Trend Media has at least two other projects in the works aside from Homeland Insecurity, including another comedy and a sci-fi drama. If any of them are as good as TSA Gangstaz, I’ll be watching.