Jeff Gomez: Transmedia is a Responsibility Not a Privilege 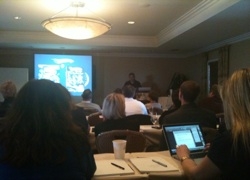 “Distant Mountains”, “The Spine of the Mythos”, “Keiretsu”: these were just some of the terms and concepts being explained to a room packed full of rapt professionals as they listened to Transmedia visionary Jeff Gomez speak for eight hours plus (he went long but no one minded one bit) on June 2nd at the Fairmont Miramar in Santa Monica, CA.

People had traveled from as far as Italy, Mexico, and Canada to attend and participate in this rare opportunity to gain valuable insight into Gomez’s process when creating a Transmedia property: from mapping out every aspect of your franchise to production of materials across platforms to whether to keep your I.P. ownership or allow fans to extend your universes—Gomez always leaned towards giving fans as much creative ownership as possible in order to extend the chances of longevity.

Organized by KidScreen, a leading international trade publication serving the informational needs and interests of kids entertainment professionals, this one day Transmedia Bootcamp, as it was marketed as, sought to arm the audience with the tools necessary to create attractive properties across such varied platforms as video games, publishing, mobile phones, as well as more traditional forms such as television and film. Some case studies (both successful as well as attempts that fell flat) explored, many of which Gomez’s Starlight Runner Entertainment had a direct role in creating, included Coca-Cola, Pirates of the Caribbean, Godzilla, The Crow, Hot Wheels, Valemont, and many more.

People feverishly took notes or typed away on laptops as Gomez openly shared years upon years of experience in creating story universes designed to not only extend beyond just one entertainment platform but indeed should work in tandem to create a cohesive and engaging whole. One of the first diagrams Gomez revealed was a set of shapes, each shape representing a platform (movie, game, book). He described a “Typical Media Franchise”, in which the shapes are simply stacked and leaned against each other: touching, but not truly connecting. He then revealed his Transmedia philosophy in diagram form in which the shapes truly fit with each other, forming a perfect rectangle. He called this Transmedia Elegance.

Tubefilter spoke with Jocelyn Christie, a publisher at KidScreen and one of the KidScreen team that was in charge of the event on how this unique opportunity for people interested in Transmedia came about. “We have been looking for an opportunity to do a new event that would replicate what KidScreen is all about, which is taking a look at the intersection between all the sectors of the kid’s entertainment industry whether it’s consumer products, whether it’s marketing, whether it’s interactive and digital media, whether it’s TV, whether it’s film…all of those components,” explained Christie. “So we have been sussing out how we could go about doing that and at the same time we fortuitously met Jeff. It turns out he’s always been a big fan of KidScreen because KidScreen is really the only magazine that covers content the way that he has always felt content should operate. We’ve been around for 15 years and that’s always been our mandate and philosophy is that we have to take a look at the whole composition. So it was a happy set of circumstances our paths crossed and through this mutually respect we have for what each other does, we decided to cook up an event that takes a look at Transmedia, which just happens to be a very hot topic the kids entertainment community.”

It’s also a hot topic outside the kids entertainment community as well. While a majority of the attendees were from corporations that focus predominately on children’s entertainment, such as Nickelodeon, Mattel Inc (who Gomez quipped “already knows all this stuff”), and National Geographic Kids, many of those in attendance simply wanted to learn more how this expanding field that continues to gain legitimacy. And while a majority of the sessions focused on tools and implementation, there was also a great deal of personal sharing, as Gomez was very open and passionate about how he started working in the field and why he continues to do so.

Gomez’s closing remarks were particularly poignant, where he revealed Transmedia helps him cope with a very difficult personal disorder that manifested itself in his teenage years. His philosophy for his work expands greatly beyond an often incorrect belief that Transmedia experiences are simply marketing tools. “Transmedia is not just a privilege”, said Gomez. “It’s a responsibility.”