Revision3 to Conan: Our Offer is on the Table 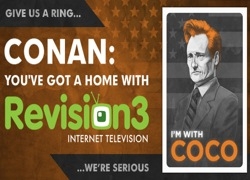 Web TV network Revision3 issued an open offer letter to NBC’s The Tonight Show host Conan O’Brien to take his show online. After the embattled late night star rejected a proposal from NBC to move the show to another time slot, there are talks of a separation agreement, in the $30-40 million range,  letting O’Brien leave the peacock network as Jay Leno prepares to take back over the 11:30 PM time slot. So flush with cash from the settlement, and perhaps in a coup de grâce to NBC, O’Brien could take his popular show to the internet.

Revision3’s VP of Programming and Production Ryan Vance made the open offer, which they say is a serious one, to Conan “Coco” O’Brien today on the company’s blog. The growing online network essentially built itself on high-profile hosts—like Diggnation’s Kevin Rose and Alex Albrecht—though O’Brien would clearly be the biggest personality they’ve had yet, and that includes a stint with Gary Vaynerchuk and his Wine Library TV!  Vance said they are offering up the “keys to the kingdom” to O’Brien, and also noted that co-host Andy Richter is also invited.

To sum up, Conan, you have the keys to the kingdom here at Revision3. You want to change our studio around? Done. Want to move any of our existing shows to 10pm Please do. Want to give Andy his own show so he can finally truly control the universe? Done. You name the game, we’ll make it happen.

Other benefits:
– A fantastic creative and supportive working environment
– No network censors
– Top notch adsales team monetizing your show
– Complimentary broadband
– “Competitive” salary (you’re going to have more money than Oprah from NBC, so what do you care?!)
– Managed social media strategy, building a dedicated audience around your show
– Decent benefits

The web has yet to have a ‘late night’ talk show with the caliber of someone like Conan. Several celebs have spun up web chat shows, some of which are holding their own like Kevin Pollak’s Chat Show, but others seem to have faded away like Crackle’s Anytime with Bob Kushell. It makes sense that 2010 will see more high profile talent testing the online waters, but at some point, possibly this year, we’ll see a major TV show make the jump to online-only distribution. Who better than severance rich Conan?