Fans of rabbit comedy web series Rabbit Bites will be glad to hear that pet food maker Purina has renewed its sponsorship at 300% of its previous rate. The partnership will last at least through the year, paid at a per-episode rate, so don’t expect to see Buns or Chou-Chou on tabloid covers for debauched parties anytime soon.

Nicholas Quixote, the creative mastermind behind Rabbit Bites, sounded pretty pleased to hear it. “They are giving me significantly more money, so I have more time,” he said, “I can now focus on the business. Another key thing to me is that it’s not a tech company. It’s a cornerstone, old line company saying they believe in web video: someone making films out of his house.”

When asked where Rabbit Bites would be going, Quixote said:

“Throughout, Rabbit Bites has focused on Entertainment in a general sense, with a subtext on Culture, especially how the visual culture and the Internet affect it. The first part started with the first Vloggers: early adapters of Internet technology like Rocketboom, ZeFrank, Steve Garfield, Roxanne, etc…we were trying to be funny, and make a few points a the same time.  The serious intent involved examining the new, sudden lack of privacy, a new immediacy in visual communication, and how that affects perception, knowledge and relationships to others…This subtext of Rabbit Bites is exploring this in many of these early videos especially and (I even decided on rabbits, with rabbit ears as a symbol of this), and this has continued throughout.” 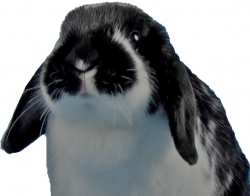 For those of you who didn’t quite catch that, the good news is that one of his upcoming projects is a retrospective that “will visually display more insight into the meaning of rabbit bites”.

Quixote continues, “The second part of Rabbit Bites moved onto satire of the quite standard and familiar popular culture targets. At the same time,  we assembled a key group of guests as you probably know: people that are really central in their field. The focus on the Internet and visual culture was less overt, but still existed in the background.  The future just promises to be bigger and better iteration of this, and hopefully a continued synthesis of the first two parts. The videos have gotten tighter and funnier. I wish I had my latest video to share with you because it is one of my best. It’s about boys hairstyles. We will also have some of the funniest and interesting guests coming up. I have already shot some comedians. Among them is Brent Weinbach, a very funny guy. I have some of the most popular YouTubers coming – Buck Hollywood, The Ford Models, and Felicia Day are examples. We’ll do some current bands too. Rabbit Bites will have a guest on about every 4th video only, the rest is satire.”

Rabbit Bites is an incredibly surreal comedic look at popular culture through the eyes of bunny couple Buns and Chou-Chou. Highlights include episodes about Dateline NBC’s To Catch A Predator and American Idol as well as a host of special guests, including MadTV comic Bobby Lee, actor David Alan Grier, and web personality Chad Vader. The show is currently available on YouTube, Revver, and Salon.com’s Video Dog section. We last covered Rabbit Bites back in Decemeber when it made our Tuesday Picks, and, trust me, you haven’t lived until you’ve seen Bobby Lee come on to a rabbit.